Nyan Win, a spokesman for the opposition National League for Democracy, told the Associated Press on Thursday that “prevalence of law in the country has to be questioned”.

“We are very sad to hear about the sentencing of Pho Phyu. It’s a shame that defence lawyers defending their clients are being imprisoned.”

Rights groups say that in recent months, the Myanmar government has imprisoned scores of student leaders, monks, and even senior lawyers working for the opposition or pro-democracy activists.

Earlier this month, two lawyers representing activists were freed after serving four months in prison for contempt of court.

Myanmar has been under military rule since 1962.

The current government has promised elections to be held next year, and says it will lead the country to democracy, but critics claim the so-called elections will only tighten the army’s grip on power. 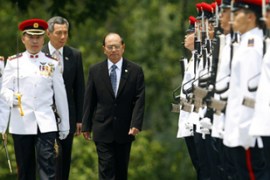