The Obama administration congratulated Funes on his victory.

“We look forward to working with the new government of El Salvador,” Robert Wood, the US state department spokesman, said on Monday.

“It was a very free, fair and democratic election.”

Members of Funes’ FMLN party fought against El Salvador’s US-backed governments during the 12-year-long civil war in which 75,000 people were killed.

In 1992, the FMLN signed peace accords with the Arena-led government, marking its transformation from guerrilla group to political party.

During the election campaign, Arena, a conservative party, compared Funes to Hugo Chavez, the Venezuelan president, and claimed that El Salvador would turn into a communist country if FMLN came into power.

Funes denied the accusation in an interview with local Megavision television after claiming victory.

“Nothing traumatising is going to happen here,” he said in an interview with local Megavision television.

“We will not reverse any privatisations. We will not jeopardise private property. There is no reason at this moment for fear.”

Funes has said plans to model his policies on those of Luiz Inacio Lula da Silva, Brazil’s moderate leftist president.

The US recession has dampened demand for El Salvador’s factory exports and Funes said his first priority will be to tackle a the economic crisis.

He plans to fight tax evasion by the wealthy and use the funds to create jobs for returning migrants. He also vows to invest in farming to reduce dependence on imported food.

During the civil war, Funes worked as a journalist reporting on the war, and later became a host of one of the country’s most popular television shows. 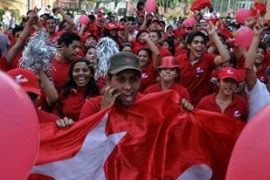