According to another UN official, the three international staff members taken were from France, Azerbaijan and Ghana. The other was a Somali national.

A witness told the Associated Press the workers had only been in Wajid for one night and were on their way to the town’s airstrip when they were seized.

According to the UN, 35 aid workers were killed in Somalia in 2008 and 26 were abducted. Two workers have been killed this year.

Hundreds of thousands of people are dependent on aid in the war-torn country. 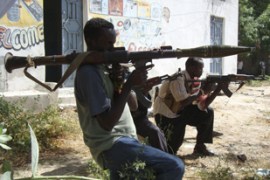