Reformists, who favour improving ties with the West and liberalising Iran’s conservative government, hope to unseat Mahmoud Ahmadinejad, the current president, in elections on June 12.

He expressed his support for Mousavi, who is now seen as the leading reformist candidate.

Khatami said Mousavi had a better chance than him of siphoning off conservatives’ votes, and has the necessary qualifications to bring change to the country.

“He can potentially win people’s votes and get elected provided we act with wisdom and realism,” Khatami said.

Mousavi managed the country during the 1980-88 war with Iraq.

Hasan Abu Nimah, director of the Royal Institute for Inter-Faith Studies in Amman and former ambassador to the UN, told Al Jazeera that many reformists had put much hope into Khatami’s candidacy.

“He was a very a familiar face for the international community and for that reason, many people had revived their hopes that coming back to the office, he would provide an opportunity for Iran to sort out its problems with the Western world,” Abu Nimah said.

“We were all surprised that he decided to withdraw, but the other candidate, Mousavi, belongs to the same reformist school and, according to reports, he would be even better in addressing the economic issues which are pressing issues in Iran.”

Mehdi Karroubi, a former parliament speaker and the other reformist candidate in the race, has repeatedly said he would not drop out regardless of who else is running, but his party was meeting on Monday to assess the situation.

Mohammad Ali Abtahi, the former reformist vice-president, has cautioned that competition among reformists would pave the way for a second Ahmadinejad term.

“We lost the previous election [2005] because of multiple candidates. And Iran has suffered so much” as a result, he said. “This is a historic opportunity that must not be lost.”

During his presidency, Khatami pushed for improved relations with the West, but many of his reforms were stopped through bodies led by religious leaders that have powers over the government under Iran’s Islamic system.

Some reformists were worried that his candidacy would galvanise the conservatives, who strongly dislike Khatami because they believe he aims to fundamentally change the nature of Iran.

Ahmadinejad is so far the only leading conservative to let it be known that he will stand.

But he has lost  some popularity because of his handling of the country’s faltering economy and other issues.

The result of June’s vote could depend on whether Ahmadinejad keeps the support of Ayatollah Ali Khamenei, Iran’s supreme leader.

Regardless of the outcome of the election, any final decisions on policy in Iran are made by Khamenei, not the president. 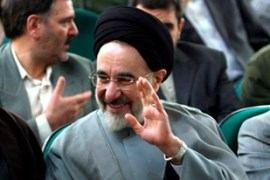 Khatami to run in Iranian election

Former president says he will run again for the office in elections in June. 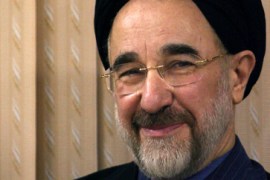 Iran’s president from 1997 to 2005 attempted to bring greater freedoms to citizens.