The case is being heard at a court in the town of St Poelten, near Vienna.

The verdict is expected by the end of the week.

Asked how Fritzl reacted to his daughter’s video testimony, Franz Cutka, a court spokesman, said the defendant had watched them “attentively”.

“The defendant was questioned about the issues that came up …  and he gave his views,” added Cutka.

Also on Tuesday, the court heard a neo-natal expert to help clarify the murder charge against Fritzl, which carries a life sentence.

During Monday’s opening statements the prosecution said Fritzl had used Elisabeth, who is now 42, “as a toy”.

But Fritzl’s lawyer said he had only wanted a second family to the one he already had with Rosemarie, his wife.

Fritzl attempted to paint himself as a victim of family neglect during his own childhood.

His lawyer said the defendant expects to spend the rest of his life behind bars.

A retired engineer, Fritzl built a soundproofed cellar with a reinforced door under his home in the provincial town of Amstetten.

“He shut [Elisabeth] away in the cellar and made her totally dependent on him, forcing her into sexual acts and treating her as if she was his own property,” his chargesheet said.

Fritzl’s daughter and her six children, three of whom were shut away from birth, are now living in a secret location under new identities.

The case came to light when one of the three children who had never seen sunlight, 19-year-old Kerstin, fell seriously ill and was taken to hospital by Fritzl.

In comments via his lawyer last year, Fritzl said he had lived a “second life” in the cellar complex, watching adventure videos with the children and bringing flowers for Elisabeth, who cooked dinner.

Three of the children born in the cellar were raised above ground by Fritzl and his wife after he pretended Elisabeth had abandoned them.

Police say that Rosemarie did not know of her husband’s actions. 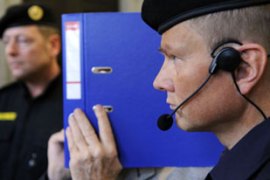