Every Sunday for over a year, a group of grandparents have gathered outside Denmark’s largest asylum centre to protest against the Danish government’s treatment of asylum seekers.

A former army camp with a grey slate roof and yellow walls, the Sandholm centre, located north of the capital Copenhagen, is home to about 600 people who have sought refuge in this Scandinavian country.

Most come from Afghanistan, Iraq, Sri Lanka or Algeria and many have been stranded there for years.

Their claims for asylum have been rejected but they are also unable to return to their countries where they may face persecution.

The protesters say they are ashamed of their government’s immigration policies, which many believe to be the strictest in Europe.

Similar protests have been held at centres across the country.

Gerd Gottlieb, a spokeswoman for the protesters, told Al Jazeera: “Everyone has a wonderful idea of the great Scandinavian utopia. Now they know.”

As far as refugee camps go, the conditions at the Sandholm centre, which is run by the Danish Red Cross, are not bad.

But the biggest problem facing those stranded there is the sense of uncertainty.

Once somebody applies for asylum it normally takes a year for their case to be heard.

Approval means the asylum-seekers receive better benefits, an apartment and the opportunity to apply for work.

But for the increasing number whose applications are rejected, like Nabil Darwish, a 36-year-old Iraqi Kurd, it means being caught up in a system with no obvious way out.

An engineer from Kirkuk, Nabil fled because he did not want to fight for Saddam Hussein, the former Iraqi president.

His family helped him pay smugglers to transport him out of the country through Turkey and across Europe in the back of a truck.

He had planned to go to Norway, but when he arrived in Denmark the smugglers demanded more money.

Unable to pay, he says he was abandoned just outside Copenhagen.

A three-man board rejected his case for political asylum but did not repatriate him because of the security situation in Iraq.

He has been stranded in Sandholm for six years, prohibited from building a new life in Europe, and unable to return to the country he fled.

“This is worse than prison because I don’t have a release date,” he says.

In the small room he shares with two others, I ask if he regrets seeking a haven here.

“Absolutely,” he says. “The system here [has been] killing me slowly now for about six years. Day by day, second by second.”

“I am [keeping] myself really occupied, not thinking about it. Because if I think about it, I will go crazy.

“You do not have the right to get married, you cannot have a job, so I think you lose your identity. Day by day it is just like someone squeezing the life out of you.”

Banned from working or pursuing an education and surviving on government handouts, others like Nabil at Sandholm say they are living a dispirited life.

Bente Rich, a child psychiatrist who has worked with many of the asylum seekers and their children in Sandholm, believes there are adverse psychological effects due to years spent in the centre with little idea what the future holds.

“It is very cruel to give people no idea when this will end. It causes many mental problems, it causes depression, and it causes post-traumatic stress,” she said.

“It means the adults can’t look after their children who feel abandoned and distressed. They suffer disturbances which are like the symptoms of children who were in concentration camps during the Second World War.”

In his last visit to the centre, Panayiotis Demetrios, a member of the European parliament, said he shared Rich’s concerns about the psychological impact of the facility on asylum seekers.

“The long periods that asylum seekers spend in there and facing an unknown future, combined with [the] tough asylum policies and practises that regulate Danish policies, [has] a psychological effect on [those] detained,” he said.

In 1951, Denmark was among the first countries to adopt the UN Refugee Convention.

In recent years, however, Amnesty International, the Danish Refugee Council, representatives from the European parliament and the United Nations High Commissioner for Refugees (UNHCR) have criticised Copenhagen’s holding of asylum seekers.

Immigration numbers in Denmark are relatively small – the number of asylum applications made since 2003 is at least three times lower than neighbouring Sweden – but the debate over immigration has dominated the last three elections and rages in the Danish media.

Since coming to power in 2001, the country’s Liberal-Conservative coalition government, which is reliant on the support of the far-right Danish People’s Party (DPP) for a parliamentary majority, has scrapped the right to asylum on humanitarian grounds, cut social benefits for refugees and imposed strict family reunification laws.

The DPP, which many say is behind the government’s tough policies, wants to significantly reduce immigration to Denmark and its critics have accused it of racism and xenophobia.

Refugee groups critical of Danish immigration laws say the government has failed to abide by the UNHCR’s definition of a refugee.

While Denmark demands that a refugee must prove they have been personally persecuted, UNHCR guidelines say it is sufficient to come from a persecuted group.

Furthermore, the UNHCR has expressed concern that some aspects of Denmark’s immigration policy appear to be “inconsistent with international refugee and human rights law” and that the tone of the political debate makes reducing immigration, rather than the protection of refugees, the main goal.

The European Court of Human Rights used an emergency procedure called ‘rule 39’ six times during 2008 to prevent Denmark forcibly repatriating refugees to countries where they risked torture and persecution.

Danish legislation also dictates that Danish citizens cannot bring a foreign spouse into the country unless both partners are 24 or older, pass a solvency test showing that the Dane has not claimed social security benefits in the past 12 months and lodge a bond of 53,000 kroner ($9,300).

Additionally, the Danish citizen must be judged to have stronger links with Denmark than any other country. This can be particularly troublesome for the roughly 8 per cent of Denmark’s population that are first or second generation immigrants.

As a result of these new laws Copenhagen-based Danes with foreign spouses are moving to the southern Swedish city of Malmo at a rate of about 60 couples a month. They commute to work in the Danish capital over the Oeresund Bridge, which connects the two countries and has now been nicknamed ‘the love bridge’.

Karen Ellemann, a spokeswoman for the ruling Liberal Party, says Danish immigration policy was too lax for years and that the current government had to introduce restrictions.

Previously, it was like an “open border for people to come and use the Danish welfare system,” she says.

In response to criticism that these restrictions contravene international law she insists that Danish immigration policies are “strict but fair”.

Ellemann is not alone in this view.

Birthe Rønn Hornbech, Denmark’s minister of integration, has spoken out against the European Union’s efforts to bring Denmark’s immigration policy into line with its own directives and the Czech Republic, which currently holds the EU’s rotating presidency, has expressed support for Denmark’s position.

With recent polls revealing that a majority of Danes agree with their government’s tough stance, the plight of those who sought sanctuary here is unlikely to improve any time soon, leaving Nabil with little hope for the future. He feels that his life is slowly slipping away.

“Do you think I can keep on like this? I don’t think so,” he says, visibly close to tears.

“Most of my friends have broken down. I think I will someday also break down.” 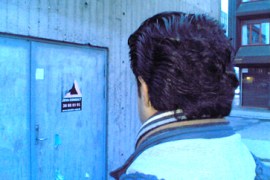 Life as a failed asylum seeker