Japan’s UN ambassador Yukio Takasu, chairman of the committee monitoring sanctions against Iran, provided few details, but his report marked the first official confirmation that the Cypriot-flagged M/V Monchegorsk was attempting to circumvent the UN arms embargo on Iran.

The ship docked in Cyprus on January 29 and is still there, diplomats said.

Rice made no mention of reports from European diplomats that the US navy intercepted the Monchegorsk, confirmed the presence of arms-related material, and alerted Cypriot officials.

Takasu said a UN member state – identified by the US, Britain and France as Cyprus – sent a letter to the committee in early February “seeking guidance with respect to its inspections of cargo on a vessel carrying its flag that was found to be carrying arms-related material”.

The committee responded with a letter on February 6 that the transfer of the material “constituted a violation” of a 2007 Security Council resolution that prohibits Iran from transferring “any arms or related material” and requires all countries to “prohibit the procurement of such items from Iran”, Takasu said.

He told the council that the committee sent letters “to concerned member states” on March 9 asking for “any relevant information regarding this transaction” within 10 days.

Copies of the letters to Iran and Syria, obtained by The Associated Press, said the ship’s manifest indicated that the Monchegorsk was chartered by the Islamic Republic of Iran Shipping Line, that the cargo was loaded in Bandar Abbas, Iran, and that it was to be unloaded in the Syrian port of Latakia.

The letters said the committee had received the results of inspections conducted on January 29 and February 2 on a portion of the cargo which found arms-related material, including items described as “bullet shells”, high explosive shells, 125 mm armour-piercing shells, and high explosive anti-tank propellant.

All 15 Security Council nations are members of the sanctions committee, which means the letters and Takasu’s report had the backing of the entire council.

There has been no decision of what to do with the cargo.

Britain has indicated that it is ready to help Cyprus dispose of the Monchegorsk’s cargo.

Caroline Flint, London’s minister for Europe, told Syrian officials that Britain and other nations “will want to help in whatever way we can”. 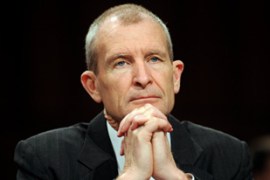 US: Iran undecided on nuclear bomb