Wijesekara is Sri Lanka’s minister for post and telecommunications.

The AFP news agency said 60 people were wounded in the attack.

“Definitely, it is LTTE,” he said.

The LTTE has in the past launched attacks on senior government officials. It has been blamed by the Sri Lankan government for hundreds of suicide attacks.

Minelle Fernandez, Al Jazeera’s correspondent in Colombo, said: “We have not heard of any claim of responsibility … One finds that, with this kind of attack, the government very quickly points the finger of blame at the LTTE. It is very much the LTTE’s modus operandi in terms of how this kind of attack is carried out.”

The bombing in Matara comes as government forces maintain their push against the LTTE in the northeast of the country.

The army, which has the Tamil Tigers surrounded in a 45sq km of strip of land, says it will soon defeat the group.

At least 74 civilians were killed and 100 others hurt on Monday and Tuesday as a result of Sri Lanka army shelling of LTTE-held areas, the pro-rebel Tamilnet website said.

The website reported that 25 children were among those killed by “intensified indiscriminate shelling” of a ‘safe zone’ known to contain civilians.

“Brigadier Nanayakkara categorically denied that the army was responsible for the killings,” she said.

“He said the government is not engaging any targets within the no-fire zone and that they are not firing on civilians.”

The UN has estimated that up to 200,000 civilians are trapped in the war zone.

The Sri Lankan govermment puts the number of trapped civilians at about 70,000, and has accused the LTTE of using them as human shields.

Over the weekend, at least 250 LTTE fighters were killed in military operations, the country’s defence ministry said.

The LTTE has fought since 1972 for an independent state for ethnic Tamils in the majority Sinhalese nation. More than 70,000 people have been killed in the conflict. 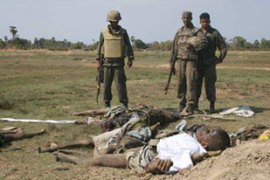 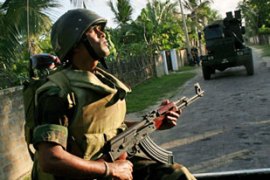 Government says two passages will be opened so people can escape clashes in northeast. 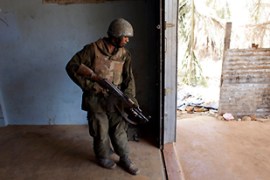 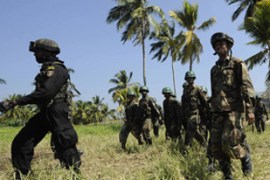