Mugabe, who has been president of Zimbabwe since 1980, admitted that his Zanu-PF party had lost last March’s legislative elections.

But he said that Morgan Tsvangirai, the leader of the Movement for Democratic Change (MDC) and Mugabe’s main political rival, must work with him to tackle Zimbabwe’s economic crisis.

“Under this arrangement I want it known, as some of you were thinking we are no longer in power, we have an inclusive government with the president at the top, followed by the two vice-presidents, then Prime Minister Tsvangirai and two deputy prime ministers,” he said.

“It’s not the work of one side. It’s the work of all. We hope we shall in this co-operative way manage to bring about some appreciable turnaround of our economy.”

Agricultural output in Zimbabwe has fallen dramatically since 2000, when Mugabe launched his policy of seizing white-owned commercial farms and turning them over to native Africans.

Most of the new beneficiaries lack both farming equipment and the expertise needed to manage the land effectively.

A decade ago, Zimbabwe produced enough maize to export the surplus. Now more than half the population is estimated to need food aid.

About three million Zimbabweans – a fifth of the population – have left the country to escape economic hardship or send remittances to relatives back home.

Tsvangirai was not at Mugabe’s celebrations, despite initial reports he would attend.

The MDC leader has in recent weeks appealed to international donors for $5bn in aid and investment.

Zimbabwe’s schools, hospital and sewerage have fallen into disrepair as a result of hyperinflation.

More than 83,000 people have also been affected by a cholera epidemic that has killed more than 3,800, according to the UN. 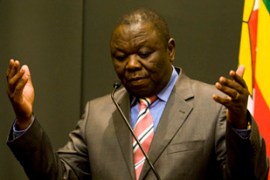 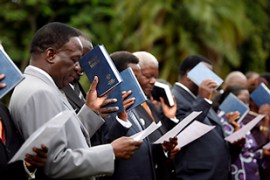 Roy Bennett to be held for further two days after prosecutors fail to attend court. 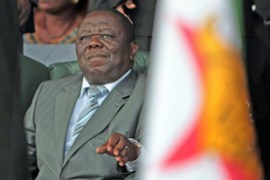 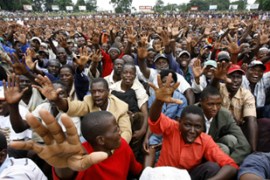