Thailand, the host of the Asean summit, has been hit particularly badly by the slowdown and it was expected to post figures on Friday showing a sharp fall in overseas trade.

Economists polled by Reuters news agency forecast that the figures for January would show a slump in exports of more than 25 per cent from a year earlier.

The Thai economy, undermined by political unrest, shrank by 4.3 per cent in the fourth quarter – its first contraction in more than a decade – and other nations such as Malaysia and the Philippines are grappling with rapidly slowing growth amid a drop in export demand.

Another issue related to the economic slump are growing worries among Asean members over the issue of food security with concerns that hunger and poverty levels will rise as economies weaken and unemployment rises.

In the Philippines, which was once self- sufficient in rice production – more than half its 90 million people are now considered food insecure.

Although land in the 10 Asean nations is largely fertile, there has been a growing trend of richer nations buying up large tracts of land to feed their own people.

It is a practise that is worrying humanitarian agencies who fear it threatens the food supplies of local populations, leaving poorer nations at risk of hunger and food insecurity.

One recent report warned that 112 million people will be food insecure in Southeast Asia, a rise of about 28 per cent.

“You’re seeing wealthier nations investing in buying land in Southeast Asia… looking not simply to enrich the local communities, but rather to build very large food plantations that will essentially remove the food that is produced from the local economy and take it to wealthier nations,” Paul Risley, Thailand-based spokesman of the World Food Programme, told Al Jazeera.

In one case, many small formerly self-sufficient family farms in northern Thailand have begun producing corn for shipment to Japan.

Usa Chaikham, a local farmer who works as a go-between putting large Japanese companies in touch with rural landowners, told Al Jazeera the growing trend could be laying problems for the future

“In the future we will suffer because the land will belong to the foreigners. We are working for them. When we get older, we will have no land to use,” she said.

While the economy will be a major point of focus at the summit, Asean leaders have also been under pressure by rights groups to also consider the growing list of abuses taking place throughout the region.

Ahead of the summit, New York–based Human Rights Watch (HRW) And Amnesty International urged Asean leaders not to let worries over the economy push human rights off the agenda.

In a statement earlier this week HRW said recent experience, particularly in the group’s approach to the military government of Myanmar – itself an Asean member and long accused of various human rights violations – had shown “glaring failures”. 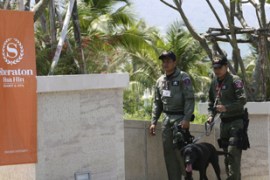 Asean under pressure over rights