The report said China had increased repressive policies in Tibet and the predominantly Muslim province of Xinjiang, and was restricting dissent and religious freedom in the two western regions.

“The government’s human rights record remained poor and worsened in some areas,” the report said.

The US report also criticised the rights record of other countries, such as North Korea, Zimbabwe, Sudan and even long-standing ally Israel.

The report was released less than a week after Hillary Clinton, the US secretary of state, visited China and said that rights concerns should not be allowed to hinder co-operation between the two countries on issues such as the global economic crisis and climate change.

That stance had won praise in Beijing – the country’s foreign ministry said her visit had helped to build mutual understanding – but angered human rights groups.

A US government official said Washington would keep raising human rights concerns with China and insisted that there was no “disconnect” between US policies towards human rights and Clinton’s remarks.

Karen Stewart, the acting assistant secretary of state for democracy, human rights and labour which oversees the rights report, said the US would continue to express “our concern for specific cases and for the overall issues that we would like to see improvements in”.

The annual rights report has long been an irritant in relations between the US and China, which has hit back with its own study of rights violations in the US, particularly focusing on the continued detention of so-called “enemy combatants” in its Guantanamo Bay prison. 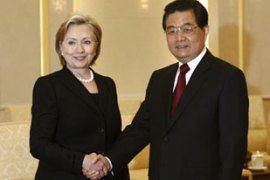