Amnesty’s report said that it had found evidence that both Israel and Hamas had used weapons supplied from overseas to carry out attacks on civilians during the three-week conflict at the start of the year.

The Amnesty report said fragments and components of artillery, tank shells, mortar fins and airborne missiles and bombs were found in school playgrounds, hospitals and homes in Gaza.

“Though far less lethal than the weaponry used by Israel, such rocket firing also constitutes a war crime and caused several civilian deaths,” she said.

Amnesty’s report accused both sides of committing war crimes and called on the UN to launch an immediate investigation into the allegations of war crimes by Israel and Hamas, the Palestinian group which governs Gaza.

Malcolm Smart, Amnesty’s Middle East director, said that “all states should suspend all transfers of military equipment, assistance and munitions to Israel, Hamas and other Palestinian armed groups, until there is no longer a substantial risk of human rights violations”.

The war in Gaza, in which more than 1,300 Palestinians and 13 Israelis were killed, ended on January 18 after both sides announced they would hold fire.

The report comes as Hillary Clinton, the US secretary of state, is to travel to Israel and the West Bank next week for meetings with Israeli and Palestinian leaders following the conference in Cairo on reconstruction in Gaza, officials in the region said on Monday.

Israel has rejected the findings of the AI report and criticised its methodology.

It said the report “presents a biased version of the events and does not adhere to professional criteria and objectivity”.

“Armaments employed by the IDF [the Israel army] comply both with international law and with its usage by Western armies,” a foreign ministry statement said on Monday.

Al Jazeera’s Jacky Rowland, reporting from Jerusalem, said Amnesty had been criticised by Israel for not taking into account the full extent of Palestinian rockets and mortars – around 10,000 – fired over the last eight years into southern Israel.

“Israel is also very critical of Amnesty for not mentioning what Israel says was Hamas’ use of civilians in Gaza as human shields,” she said.

Hamas has also rejected Amnesty’s criticism of its actions.

It said the report was unfair, and that there was no comparison between the Israeli war machine and Palestinians who “defend themselves with some rifles and other primitive means”.

Amnesty has called on Washington, which gives $3bn a year in military aid to Israel, to investigate Israel’s use of US weapons during its Gaza campaign.

Colby Goodman, a policy director for military security at Amnesty, said that the US had done so at least six times previously.

“According to the Arms Export Control act, when there’s a potential violation by another country of that act, using US weapons, the state department is required to investigate those allegations,” he said.

Sporadic violence is continuing along the Israel-Gaza border, while Egypt works to broker a long-term truce between the two sides.

A rocket struck Israel on Monday morning, but no injuries were reported.

Earlier, the Israeli military said two armed men fired across the Gaza-Israel border fence at an Israeli patrol, which called for air support.

Palestinian security sources said that two missiles hit the armed men’s vehicle, but that no one was hurt. 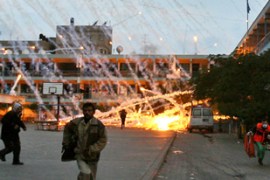 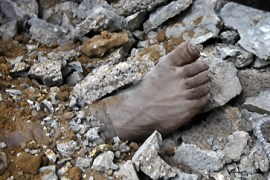 If war crimes have been committed in Gaza, prosecuting suspects will not be simple. 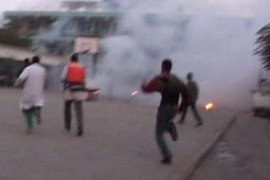