McKiernan said most of the additional troops would go to southern Afghanistan, the heartland of the battle against the Taliban and where Nato forces are struggling to hold terrain.

“What this allows us to do is change the dynamics of the security situation, predominantly in southern Afghanistan, where we are, at best, stalemated,” he said.

And the commander of US and Nato forces in Afghanistan said the US would need to be heavily committed for years to Afghanistan, where violence blamed on the Taliban has increased to its highest levels since US-led forces ousted the Taliban from power in 2001.

“For the next three to four years, I think we’re going to need to stay heavily committed … in a sustained manner in Afghanistan.”

The warning of a tough year ahead comes as Hamid Karzai, the Afghan president, said that tensions with Washington over civilian casualties were now over.

“The tension the Afghan government had with the US government is now over,” Karzai said during a speech in Mahter Lam, east of Kabul, on Wednesday.

He added that “from now on, no foreign troop operations will be uncoordinated with Afghan forces”, after the two sides agreed to co-ordinate operations last week.

His comments came as a senior US military official travelled to Afghanistan on Wednesday to investigate accusations that civilians were among those killed by a US air strike in Herat province on Tuesday.

Relations between Washington and Kabul have been strained by Karzai’s protests over civilian casualties and by US complaints that he was not doing enough to fight corruption.

On Tuesday, after announcing the US troop increase in Afghanistan, Obama spoke to Karzai by phone for the first time since taking office a month ago.

Humayun Hamidzada, a Karzai spokesman, said the Afghan leader and Obama discussed ways of improving security and the training of the national army, along with the troop increase.

“We have opened a new page,” Hamidzada said.

But Karzai also warned that “if foreign troops do not listen to us, we will call a Loya Jirga [grand council] and we will also include the Taliban and [Afghan commander Gulbuddin] Hekmatyar to decide whether foreign troops should stay in Afghanistan.”

The United Nations says more than 2,100 civilians were killed in Afghanistan last year, about 40 per cent more than in 2007.

A quarter of the deaths were a result of air strikes.

Washington’s move to send extra troops will bring the strength of its forces in Afghanistan to 55,000, along with another 30,000 troops from other nations, mainly Nato allies.

Al Jazeera’s senior Washington correspondent, Rob Reynolds, explained that with 17,000 boost, Obama had taken ownership of the Afghan war which he inherited from predecessor George Bush.

The Obama administration is still conducting a review of its Afghan policy and the White House says the new deployment does not pre-empt the recommendations of the review due in April.

But McKiernan, who asked last year for 30,000 more troops, said the US was “facing a very resilient insurgency” and that the Taliban had fought allied forces to a stalemate in some regions, which could wreak havoc with Afghanistan’s summer presidential elections.

For Obama to wait until April to deploy more troops would be to risk a further increase in violence, which is why he acceded to his commanders’ request, our correspondent said.

The US is expected to put pressure on its allies to send more troops at a meeting of Nato defence ministers in Poland this week. 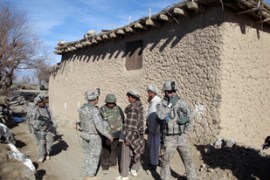 More US troops set for Afghanistan

Obama authorises deployment of 17,000 more soldiers but vows to use diplomacy.