The bombing was the latest in a series of attacks on Shia Muslims in Iraq in past weeks.

On Friday, 42 pilgrims on their way to Kerbala were killed in a suicide attack. An attempted suicide bombing also took place on Saturday in the same area.

A day earlier, eight people were killed by a roadside bomb near the Imam Hussein mosque in Karbala.

Thousands of Shia pilgrims have converged under high security in Karbala, defying threats of suicide attacks.

Iraqi officials said millions of people have visited the city in the last week for the ritual, which marks the mourning for Hussein, the Prophet Mohammad’s grandson.

The local police chief said that at least 30,000 police were in force around the city to prevent further attacks.

Policewomen have been searching female pilgrims following an attack by a female suicide bomber.

Since the invasion of Iraq by US and British-led forces in 2003, Shia pilgrims to Karbala have frequently been attacked by fighters. 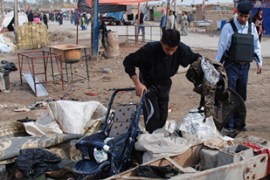 Shia Muslim pilgrims targeted south of Baghdad in the latest of a series of deadly attacks. 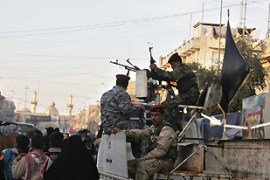 Shia Muslims marking Ashura targeted in Karbala as policemen are killed in Mosul.