Qatar, the United Nations, the African Union and the Arab League have all sponsored the negotiations, stressing that the Doha talks are preliminary and intended to pave the way for a broader peace conference on Darfur.

The rebel group is reported to have agreed to a prisoner swap with the Sudanese government.

“The two sides have committed themselves in principle to an exchange of prisoners, to be freed in successive groups between now and the launch of talks on a framework agreement on peace in Darfur,” Tahar el-Fakih, a Jem delegation member, told AFP news agency.

Amin Hassan Omar, a member of the Sudanese government delegation, was quoted by the Qatar News Agency as confirming that “on the principle … there is a commitment to release prisoners and detainees for events linked to the Darfur conflict”.

Monday’s development followed a long meeting between the heads of the two delegations, Khalil Ibrahim, leader of Jem, and Nafie Ali Nafie, an aide to Omar al-Bashir, the Sudanese president.

According to the United Nations, 300,000 people have died and more than 2.2 million have fled their homes since rebels in the western region rose up against the Khartoum government in February 2003. 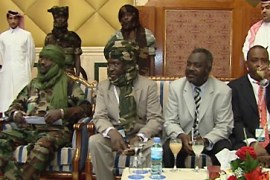 Government and rebel group are close to reaching a peace deal. 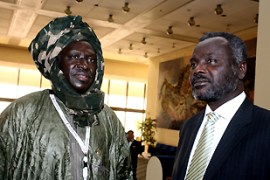 Rebels say they are close to signing accord with Sudanese government. 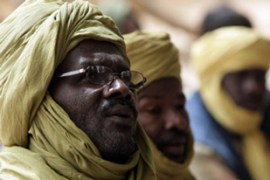 Jem chief says agreement with Khartoum must be fair if it is to be sold to people of Darfur. 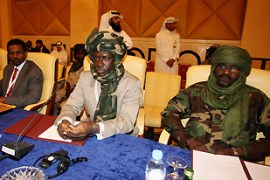