The Tamil Tiger fighters could not be reached for their version of the alleged incident as communication to the north is largely cut off.

On Monday, a suspected Tamil Tiger suicide bomber killed at least 30 people at a camp for people displaced by the conflict.

The suicide bombing was condemned by the UN and the US. They said the attack was an “apparent effort by the LTTE to discourage Tamils from leaving the conflict area”.

According to the government thousands of Tamils are crossing the frontlines every day.

Nanayakkara said: “What we are seeing is that more people are coming over to our
side. The Tigers have also been firing mortars at the routes taken by the civilians, but still they want to escape from the fighting.”

Sri Lanka accuses the LTTE of using the civilians as human shields.

The military has pushed the Tamil Tigers, who are fighting for a homeland for ethnic Tamils in the north and east of the island, back into a small patch of jungle on the east coast.

It says that the area under the separatists’ control has been reduced to less than 100sq km by the latest military offensive.

More than 20,000 civilians have reportedly fled the area in the past few days, heading for government-declared “safe zones” as the two sides have continued to bombard each other with artillery fire.

“We expect many more to come in the next few days, despite the suicide attack,” Mahinda Samarasinghe, Sri Lanka’s human rights minister, said.

The United Nations and aid agencies have expressed concern for the estimated 250,000 civilians trapped in the conflict zone.

The government has disputed the figure, saying that there are only 120,000 people in the war zone.

Al Jazeera’s David Hawkins, reporting from Sri Lanka, said the government had been criticised for putting civilians who left the war zone into military camps.
“[Government officials] say they have to check the civilians very carefully to make sure Tamil Tiger fighters are not trying to sneak out along with them,” he said.

“This suicide bomb attack shows that those concerns are legitimate.”

International organisations including the Red Cross have urged both the government forces and the rebels to let non-combatants out of the conflict zone. 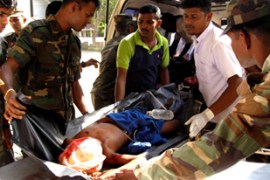