But there was some disagreement over casualty figures.

Rescuers said someone may have accidentally dropped a cigarette, although there was also suspicion someone angered at being blocked by police may have started the fire on purpose.

Titus Mungou, the Kenya Red Cross spokesman, said: “The people went to scoop up the oil, then something lit the fire, maybe someone dropped a cigarette.”

According to witnesses and rescue services, the tanker overturned after being involved in an accident.

When the oil tanker careered off the road, hundreds of locals came to the scene with containers to try to scoop up some free fuel, witnesses said.

But the oil caught fire and the blaze engulfed the crowd.

Bodies charred beyond recognition were strewn across the road as emergency services struggled to cope with the casualties.

Raila Odinga, Kenya’s prime minister, said the disaster showed the desperation of poor Kenyans and the nation’s lack of preparedness for accidents.

“Poverty is pushing our people into doing desperate things just to get through one more day,” he said during a visit to victims of the blaze.

“This being a rural area, there was no response by any disaster team because there is no such team.”

The fire followed the deaths of at least 25 people in Nairobi when a supermarket caught fire earlier this week. 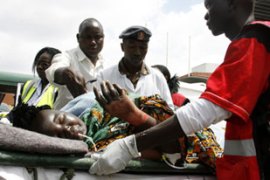