Before the attacks, Israeli aircraft also flew over an area near the border town of Rafah, setting off sonic booms.

Witnesses said hundreds of people who work in the tunnels there fled, along with residents.

Hoda Abdel Hamid, Al Jazeera’s correspondent, reporting from Gaza City, said that the Israeli military had “told us this was the beginning of a new wave of raids over Gaza, but they did not elaborate any further”.

“We know from people’s we’ve contacted that jet fighters are being heard overhead in the skies and people are quite nervous at the moment … people are in a state of panic and alert here,” she said.

The attacks followed a warning by Ehud Olmert, the Israeli prime minister, of severe reprisals in response to renewed rocket fire into southern Israel.

“We’ve said that if there is rocket fire against the south of the country, there will be a severe and disproportionate Israeli response to the fire on the citizens of Israel and its security forces,” he said on Sunday at the weekly cabinet meeting.

At least three rockets were fired into Israel from the Gaza Strip on Sunday, but caused no damage or injuries, police said.

Al-Aqsa Martyrs Brigades, which is affiliated with the rival Fatah group, told Al Jazeera that it carried out the attacks.

Later a mortar barrage on the village of Nahal Oz, next to the Gaza border fence, wounded two soldiers and a civilian, the Israeli military and rescue services said.

Israel and Hamas, the Palestinian group, declared separate ceasefires last month after a 22-day Israeli offensive in the Gaza Strip that killed at least 1,300 Palestinians, many of them women and children.

Halting the Palestinian fire was one of Israel’s stated aims for the air, naval and ground assault that also caused hundreds of casualties and destroyed much of the territory’s infrastructure.

But there has been sporadic rocket fire across the border and a number of Israeli air raids since the truces were announced.

Tzipi Livni, the foreign minister, one of the candidates to replace Olmert after parliamentary elections on February 10, also used the cabinet meeting to threaten further action against Hamas.

“Hamas was given a very serious blow and if necessary it will be given another blow,” Ehud Barak, Israel’s defence minister and the leader of the Labor party, said.

A spokesman for the Hamas government in the Gaza Strip condemned what he described as Olmert’s “aggressive statement”.

“We condemn the statements by Olmert and others today threatening the Gaza Strip,” Taher al-Nunu, a Hamas spokesman, said in a statement on Sunday.

Egyptian mediators have been attempting to secure a long-term ceasefire addressing Israel’s concerns over rocket attacks and weapons smuggling into Gaza, as well Palestinian demands for the siege of the territory to be lifted. 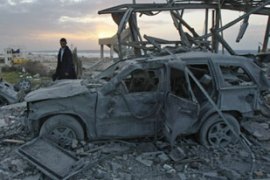 Israeli PM says he will use “disproportionate” force in response to rocket fire.