“The climate is very tense. We feel threatened, intimidated, attacked,” he said.

Nicolas Maduro, Venezuela’s foreign minister, condemned the synagogue attack and promised it would be investigated, while reiterating his government’s opposition to what he called Israel’s “criminal” government.

“We respect the Jewish people, but we ask respect for the people of Palestine and their right to life,” Maduro said in a ceremony held to welcome home two Venezuelan diplomats expelled from Israel this week.

The Israeli government ordered Venezuela’s ambassador in Tel Aviv and his two staff, along with the country’s chief diplomat in the occupied West Bank, to leave after Caracas decided to cut off diplomatic relations on January 14.

Leaders of Venezuela’s estimated 15,000-member Jewish community warned that vocal denunciations of Israel by Chavez and state-run media may have encouraged Friday’s attack. 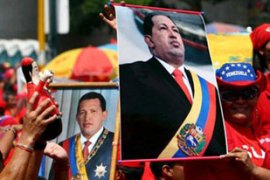 Caracas says it is “proud” to have ambassador forced out after diplomatic ties cut.