The freed hostages are reportedly in a healthy condition.

A delegation including Cordoba, representatives of the International Committee of the Red Cross and members of a Colombian peace group, received the captives.

Al Jazeera’s Mariana Sanchez, reporting from Villavicencio, said: “From here they will be taken to their families and to Bogota.”

The handovers are the first to be carried out by Farc in almost a year.

Jara, who was kidnapped in July 2001, and Lopez, who was taken in April 2002 along with 11 other provincial legislators, are the only Colombian politicians still being held by Farc.

Lopez was the only survivor of an incident in June 2007 in which 11 other hostages were killed, allegedly when their Farc captors believed they were about to be attacked by troops.

Claudia Rugeles, Jara’s wife, said: “I think that a family relationship can be retrieved, it is like when you get angry with somebody and then you meet again and you talk a lot and become friends again.

“But it is true that the missing time my 15-year-old son has lost is impossible to get back.”

Al Jazeera’s Sanchez said that Farc, which has been fighting the Colombian government for 45 years, was keen to release the hostages to restore some of their lost credibility.

“There is a lot of rejection among the Colombian people and among the international community for using hostages as bargaining tools with the Colombian government,” she said.

“They need to find a way to reposition themselves so they can continue this war.”

Colombia’s military has pledged to stop military operations in the area of the handover and told the guerrillas that they would be given time to leave the site before helicopters arrive to take the captives to freedom.

“Hopefully the hostages, who’ve suffered so much, will be received by their families as soon as possible.”

A number of Farc fighters were captured last July when Colombian forces posing as humanitarian workers rescued 15 hostages, including Ingrid Betancourt, a French-Colombian politician, and three US military contractors.

The guerrillas are believed to have been weakened by a sustained Colombian military effort supported by $4bn from the US for sophisticated surveillance, communications intercepts and other tools.

Carlos Lozano, the editor of the communist weekly Voz, said the group was releasing the hostages because “they are heeding a call by society by showing flexibility and making a political gesture”. 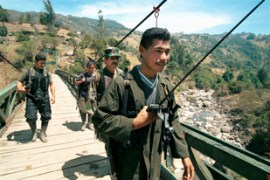