A river used to flow at the site where Yan Hongmei stands with her daughter.

She remembers it well; 20 years ago, the river carried clear cold water and her father caught fish there big enough to eat.

But, slowly the sand began to encroach. At first it was just a little blown in by the wind.

But the wind grew into more frequent storms and the air became yellow with sand. People wrapped scarves around their faces to guard against it.

The Gobi desert was infringing on Huailai, the area where Yan lives, and the trees lost their strength to fight it.

It rained less and less. “And when it rained, it caused a storm flood,” says 28-year-old Yan.

Living off the sand

Yan recalls how, when she was a child, her family grew maize that dried in the sun behind their house and how, like many other families in the area, they bred small, sturdy Mongolian horses. But only a few thin goats now survive and the family has little money.

Yan’s home is not in a remote part of China – it is just 80km from Beijing and 30km from the Great Wall.

Any aircraft leaving Beijing bound for Europe flies over the village. But if Yan were to see that view from an aeroplane, she would be frightened by the size of the Gobi desert in relation to the short distance between her home and Beijing.

Heading west from Beijing by plane, for almost two hours one sees only barren earth and sand – interrupted by small villages along dirt tracks.

Green conifer forests only come into view as the aeroplane nears Ulaanbaatar, the capital of Mongolia.

Yan’s family now make their living from the desert by renting out the nearby sand dunes to film crews and tourists from Beijing.

Yan is the cashier, while her husband helps the film crews with their technical equipment. They do not have any competition in the area yet and manage to make a decent living.

But they are unsure what will happen if the desert encroaches even further and know that they cannot halt the sand.

When Zhu Rongji, the then prime minister, took office in 1998, he travelled to the drought-hit areas of northern China. Alarmed by what he saw there, he planned a belt of thousands of trees – a green wall against the sand.

A protective ring of trees were also planted in the area where Yan lives. “The farmers are satisfied,” says Yan. “But you can’t plant trees like this everywhere,” Zhang adds.

Some experts agree with Zhang’s assessment of the situation.

“In some regions the development is under control,” says Wu Wei, a scientist with the department of environmental sciences at Peking University, “but overall it has worsened.”

About 20 per cent of China’s surface is experiencing desertification and driving back the desert costs the country $12m a year.

Scientist Wang Xunming of the renowned Chinese Academy of Social Sciences (CASS) believes that during the second half of this century the arid and semi-arid areas in northern China will turn into sand dunes or at the least very arid steppes.

“The survival of the people is under threat,” says Wang, who is convinced that this situation has not been caused by cultivation, but by global climate change.

Liu Tuo, the head of the Office for Prevention and Control of Desertification, says that the encroaching sand is a “serious threat to the people living in this area” and that it harms biodiversity.

“About 15 per cent of the species in this habitat are on the brink of extinction,” he says.

In China, alarm bells begin to ring furiously when the country’s economic miracle comes under threat.

That is why Wang Tao, the head of the Institute for Environmental Protection at CASS, has calculated the damage of the drought in the ten northern Chinese provinces.

The Middle Kingdom, with its 1.3 billion people, is facing huge costs as a result of climate change; this explains why the government may feel more pressure than smaller countries to respond to the global phenomenon.

Professor Adil Najam of Boston University says he has “big hopes for China”.

As the director of the Pardee Centre for the Study of the Longer-Range Future, Najam was the lead author of the third and fourth assessments for the Intergovernmental Panel on Climate Change (IPCC), for which the IPCC was awarded the 2007 Nobel Peace Prize with other scientists and Al Gore, the former US vice-president.

Najam says China will go its own way “but ultimately it will do the right thing because it knows it is in its own interests”.

Villager Yan has a more down-to-earth approach. “The problem is so huge that even our government is hardly in the position to address it,” she says.

Yan’s relatives from the barren mountainous province of Gansu in the northwest are even worse off. They do not get even half of China’s average rainfall.

“They are earning less and less,” says Yan. They live off just $120 a year, while Yan and her husband earn five times as much.

Even the Chinese government considers people with an annual income of less than $150 to be very poor and, in Gansu province alone, 4.4 million people earn less than this.

Yu Qingtai, the Chinese special representative for climate change negotiations, likes to place a transparency showing the poorest regions of China over a map of the regions most affected by climate change. They are literally congruent.

Yan is glad that she is able to lead a better life than her relatives. But she wonders how her daughter will live when the air is once again full of sand.

She says: “My daughter will have to move to the city. We will stay behind alone – in the dust.”

Frank Sieren is a bestselling author who has been living in Beijing for 15 years and is regarded as one of the leading German China experts.

His brother Andreas is a specialist in international relations and development aid. He worked for many years for the United Nations in Asia and Africa. 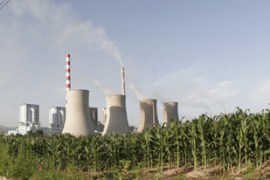 Earth in ‘hottest decade on record’ 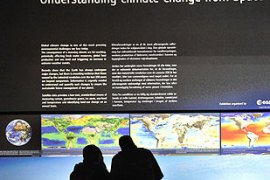 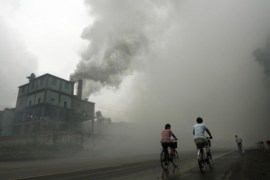 Ecologist says while a real phenomenon, global warming is largely due to natural cycles.