The United States on Tuesday condemned the deadly attacks in Iraq pledging “to support the Iraqi people as they face down violent extremism”.

Less than nine months before the US is to pull out combat troops from Iraq, the attacks in the capital, Baghdad, underlined concerns over the readiness of Iraqi forces to handle security alone.

Iraqi authorities faced angry questions about how bombers again found holes in Iraqi security and the attacks prompted Joe Biden, the US vice-president, to call on Iraq’s leaders to show support.

“The United States strongly condemns these attacks on the Iraqi people and their elected government,” Biden’s office said on Tuesday.

The attack came days after Barack Obama, the US president pledged that US forces would meet the deadline to withdraw US combat troops from Iraq by August next year, and completely pull out by the end of 2011.

Admiral Mike Mullen, the chairman of the Joint Chiefs of Staff, echoed that on Tuesday, saying the co-ordinated violence would not derail plans to begin withdrawing US troops from Iraq.

“Certainly we’re always looking at plans that take into consideration other outcomes, but right now we just don’t see anything at this point in time that would require us to execute those,” the senior US military officer said.

The planned drawdown of US forces from Iraq in the medium-term is in contrast to Obama’s strategy on Afghanistan, to which the US president last week committed 30,000 more troops.

Mullen said: “Clearly I’ve got my increase in Afghanistan on a balance with the decrease in Iraq, and I can actually execute that within some margin. So it is by no means one for one, or even one brigade for one brigade kind of thing.

“For the worst case kinds of options, obviously, it would start to impede. But right now I don’t think we’re even close to that.”

Tuesday’s attacks in Baghdad – the third such co-ordinated wave of attacks to devastate the capital since August – struck government targets across the city in rapid succession, leaving at least 127 people dead and at least 513 injured.

Five bomb-laden vehicles were driven into a finance ministry office, a tunnel leading to the labour ministry, a courthouse, a police patrol, and interior ministry offices in central Baghdad.

There was no immediate claim of responsibility, but Iraqi officials said the attacks bore the hallmarks of al-Qaeda and fighters loyal to Saddam Hussein’s Baath party who plunged the country into sectarian bloodshed and chaos in 2006-2007.

The last two major strikes on Iraqi government sites were co-ordinated blasts in August and October this year that killed more than 255 people.

The latest attacks came hours before an official said that Iraq’s general election – the second since US-led troops overthrew Saddam as president – would be held on March 6.

The election is seen as crucial to consolidating Iraq’s fledgling democracy ahead of the planned US withdrawal.

Mullen said US troops would not be drawn down until after the elections.

He said US commanders believe that even with the delay in the elections – originally scheduled to be held in January – the force can come down by 50,000 troops by August.

But he said the US military is paying close attention to the situation and working to help Iraqi security forces to address any shortfalls.

“We still have 115,000 United States troops in Iraq as a symbol of the United States commitment here, and we want to see this thing come out well,” he said. 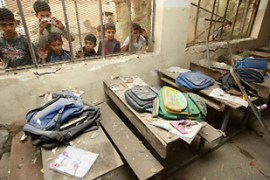 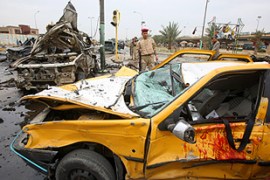 Presidential aide says parliamentary elections will be held on March 7. 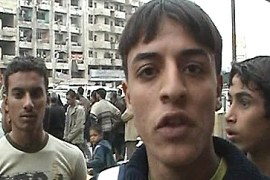 Government under fire as ministries among targets in string of co-ordinated attacks. 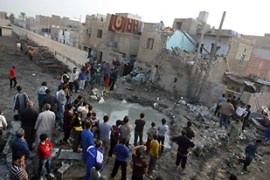