“We are estimating that the ferry was carrying around 100 passengers and the rescue mission is ongoing,” he said.

More than 3,000 people are estimated to have died in accidents on boats in Bangladesh since 1977, with most of the incidents blamed on poor safety standards and overloading.

Shahjahan Khan, Bangladesh’s shipping minister, said after that accident that a stampede by passengers had caused the MV Coco-4 to sink.

The vessel was carrying people travelling from cities to their home villages for the Muslim holy festival of Eid al-Adha.

Police called off the search for more bodies on Friday morning, nearly a week after the incident.

The government has filed a case against the owners of the vessel – Tareque Rahman and Arafat Rahman Coco, sons of Khaleda Zia, a former prime minister of Bangladesh. 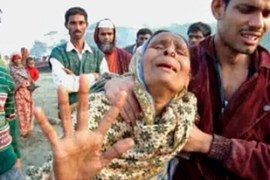 At least 49 people have been killed and scores are thought to be trapped under water.