They were driven out of the camp in military trucks and were then to be put on 110 buses going to the Thai border town of Nong Khai. Once in Laos, they will head to the Paksane district in the central province of Bolikhamsai, Thana said.

The European Union said it was “deeply dismayed” by the move and issued a statement that urged Laos to ensure the Hmongs’ human rights are protected and international observers are granted “unfettered access” to them.

The Hmong refugees have been seeking asylum in Thailand saying they face persecution from the Laotian government for fighting alongside US forces during the Vietnam War.

Among those deported were 158 Hmong who had been identified by the United
Nations as refugees and were being held separately from the larger group at a detention centre near the Lao border.

“The forcible return of refugees to their country of origin is a violation of international customary law,” she said.

“It’s a departure from Thailand’s longstanding humanitarian practice as a major country of asylum in the region and that’s a very grave example
internationally.”

The Thai government claims most of the Hmong are economic migrants who entered the country illegally and have no claims to refugee status.

On Monday, the New York-based Human Rights Watch called the deportation “appalling” and a low point for the government of Abhisit Vejjajiva, the Thai prime minister.

“As a result of what Thailand has done to the Lao Hmong today, Abhisit sinks Thailand’s record on contempt for human rights and international law to a new low,” Sunai Phasuk, a Thai representative for Human Rights Watch, told The Associated Press news agency.

However, Abhisit said that Thailand had received “confirmation from the Lao government that these Hmong will have a better life”. 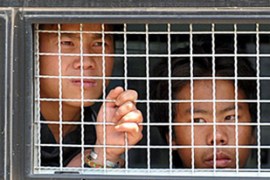 Soldiers move in to close refugee camp amid criticism from rights groups and US.