The Start treaty, signed just before the collapse of the Soviet Union, led to deep cuts in the Russian and US nuclear arsenals but expired without a replacement earlier this month.

Speaking to Al Jazeera, Dmitry Babich, a political analyst from Ria Novosti, a Russian news agency, said: “There are conflicting reports on how the talks have been going until now because if the talks had been going well they would have signed the new Start treaty before December 5 when the old treaty in fact expired.

“So the talks were not going particularly well, I think that basically the trick is to cut the number of nuclear stockpiles of both countries, but not to cut them too much so that other aspiring nuclear powers will not get the temptation to become as big as Russia or the United States.

“So it’s a very tricky game and obviously Putin is hedging his bets in that game.”

Asked by a journalist what the biggest problem was in talks to replace the old Start treaty, Putin said: “What is the problem? The problem is that our American partners are building an anti-missile shield and we are not building one.”

“The problems of missile defence and offensive arms are very closely linked,” Putin said in comments broadcast on state television.

“By building such an umbrella over themselves our partners could feel themselves fully secure and will do whatever they want, which upsets the balance.

“Aggressiveness immediately increases in real politics and economics [in this situation].

“To preserve the balance, we must develop offensive weapons systems, not missile defence systems as the United States is doing,” he said.

Putin’s comments follow remarks earlier this month by Dmitry Medvedev, the Russian president, that Moscow would continue to develop a new generation of nuclear missiles even as the Start successor talks continued in Geneva.

Barack Obama, the US president, announced last July plans to “reset” troubled US ties with Russia and two months later cancelled plans to deploy elements of a new US missile shield in eastern Europe, near Russia’s borders.

However, Obama made clear US intentions to continue work on a new missile defence system elsewhere, and Putin’s comments mark the sharpest language heard from Moscow in some time on the plans.

Russia has long pushed for a link between offensive and defensive weapons in a new Start treaty, and such language was part of a joint declaration on disarmament by Medvedev and Obama after their Moscow summit July.

Putin said on Tuesday that Washington should share its missile defence plans with Moscow if it wanted to ease Russian alarm on the issue.

Alexander Konovalov, a defence analyst, said that Moscow was asserting its right to build new strategic missiles and seeking concessions on the issue from US negotiators as they continued talks on Start with Russian officials in Switzerland.

Despite his remarks on US missile defence plans, Putin said on Tuesday that the Start negotiations were “developing positively”.

His remarks bolster a view that the Russian prime minister, who preceded Medvedev as president, still has considerable sway in shaping the country’s foreign policy, a prerogative which under the constitution should be Medvedev’s domain.

“This is not his sphere, but Putin is showing he is not weaker than Medvedev,” Konovalov said. 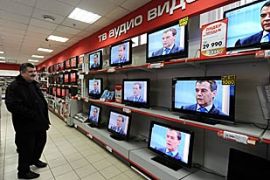 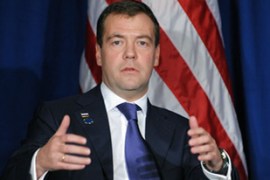 US and Russia ‘close’ to arms deal

Obama and Medvedev fail to reach agreement on successor to 1991 nuclear weapons treaty. 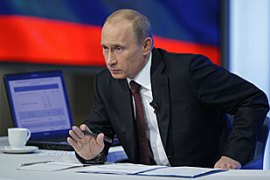 Putin may run for president in 2012