Shell, which has a 30 per cent stake in the subsidiary, said it was disappointed by Wednesday’s ruling.

The plaintiffs, supported by Friends of the Earth, said they turned to Dutch courts because it was impossible to get a fair hearing in Nigeria.

Geert Ritsema, a spokesperson for Friends of the Earth Netherlands, said: “For years, these people have been trying to get Shell to clean up its mess and stop polluting their habitat.

“However, again and again they have come away empty handed. That is why they are now trying to get justice in the Netherlands.

“The court decision is an initial victory for all Nigerians that have been fighting for years for a cleaner habitat and justice.”

Speaking to Al Jazeera, Ritsema said that Shell did not want the case heard in The Hague because “they [Shell] think in Nigeria they can get away with polluting the environment without paying compensation”.

Ritsema said: “They [Shell] are quite aware that in the Netherlands, in front of a Dutch court, it will be much harder for them to escape liability.”

The plaintiffs are farmers and fishermen and come from the villages of Oruma, Goi and Ikot Ada Udo, all three located in the oil-rich Niger Delta.

According to Friends of the Earth Netherlands, the oil spills are not incidents but represent a pattern of systematic and serious pollution and contempt for the rights of the local population that has been going on for decades.

The substantive hearing of the first lawsuit will focus on the village of Oruma.

Friends of the Earth Netherlands said that as a result of an oil spill from a high-pressure oil pipeline in June of 2005, the fish ponds and farm land of Alai Efanga, a plaintiff from Oruma, are still unfit for use today.

Efanga said: “Our village was pleased with the decision of the Dutch court. We hope that Shell will now quickly clean up the oil pollution so that we can resume growing food and fishing.”

According to Shell, the leak was caused by “sabotage” and did not result from bad maintenance of the pipeline, as the plaintiffs claim, and the oil firm also says the leak had “a limited impact” on the environment.

Oil firms operating in the Niger Delta have long been subject to attacks and sabotage by local armed movements claiming to want better living standards and a share in the oil wealth for local people.

A spokeswoman for the court said the trial would begin on February 10. 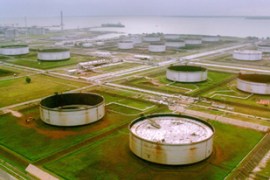 Movement for Emancipation of the Niger Delta says “many more” attacks will follow.

A rebel group fighting government troops in the oil-rich Niger delta has said it will launch an all-out war on the Nigerian state from the beginning of next month.