Egypt’s Rafah border crossing point is the only entrance point into the Gaza Strip not controlled by Israel.

However, both it and the Israeli-controlled border points have largely remained sealed since 2007, when Palestinian faction Hamas took full control of the territory after brutal infighting with rivals Fatah.

March organisers had called the Egyptian government’s concession a “partial victory” but said the offer was not sufficient.

Ali Abunimah, co-founder of the Electronic Intifada and a participant in the march, posted to his blog, saying that “it’s not enough and the pressure and protests should be kept up”.

“However, getting 100 or 1,300 into Gaza does not end the siege by itself. This is not about getting some or even all into Gaza, its building global support and pressure to end the siege of Gaza,” he said.

Roqayah Chamseddine, a US student attending the march, told Al Jazeera: “Our mission is not to be divided and sending only 100 of over 1,300 would be doing just that.

“For anyone to claim that Egypt was doing us a favour by offering to allow 100 GFM members to go is asinine and baseless.

“Those borders must be opened and as long as Egypt continues to seemingly aid Israel in subjugating the people of Palestine we will also continue to resist an protest.”

Earlier on Tuesday, around 40 US citizens marching to their embassy in the Egyptian capital were met along the way by riot police, who corralled them into groups of 10 before allowing them access, participants said.

On Sunday and Monday, about 80 people held a sit-in oustide the French embassy to try to rally international support for the movement.

Others, such as US citizen Hedy Epstein, an 85-year-old Holocaust survivor, have gone on hunger strike to protest against Egypt’s refusal to allow the march to proceed.

A separate aid convoy, which had been trying to reach Gaza by way of Jordan’s Red Sea port of Aqaba, has meanwhile agreed to travel via Syria instead.

The Viva Palestina convoy, carrying 210 lorries full of humanitarian aid for the people of Gaza, crossed into Syria on Tuesday after spending five days in Jordan, negotiating with the Egyptian consul there.

It is now expected to set sail from the Syrian port of Latakia to the Egyptian port of El Arish on the Mediterranean, and then cross through Rafah into Gaza from there.

A statement from the Egypt’s ministry of information said that George Galloway, the British member of parliament leading the convoy, had been told by November 10 that the group had to travel through El Arish, even though it is not the most direct route. 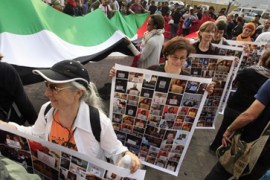 Police in Cairo attempt to stop US activists from approaching the American embassy. 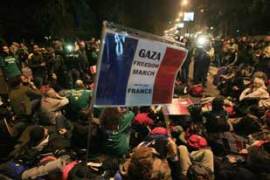 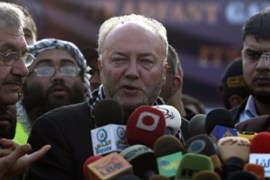 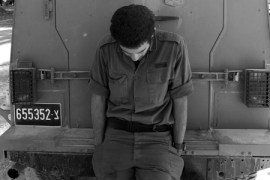 A year after Israel’s war on Gaza, Al Jazeera examines its repercussions.