Security forces entered the camp armed with batons and shields, although the army said it would not use violence.

Thana denied an allegation of brutality made by a human rights group, which said people inside the camp had used their mobile phones to report violence and bloodshed.

“There has been no violence and nobody has been injured,” Thana said.

He said there was no resistance from the Hmong and that it was impossible for anyone in the camp to call outside because the military had jammed mobile phone signals.

Sunai Phasuk, a consultant at the New York-based Human Rights Watch, told Al Jazeera that repatriation on such a scale has not been seen before.

“It is very concerning that the Thai army has enforced a communications blackout in and around the camp.

“Mobile phone signals have been jammed for the past two days, and nobody knows what exactly is going on or whether force has been used to move the Hmong onto the buses,” he said.

Journalists and independent observers have been barred from the camp and were
allowed no closer than a media centre about 12 km away.

The Hmong refugees have been seeking asylum in Thailand saying they face persecution from the Laotian government for fighting alongside US forces during the Vietnam War.

Thai officials say the group at the Huay Nam Khao camp are economic immigrants who entered the country illegally.

The UN Refugee Agency (UNHCR) has been refused access to the camp to assess whether any are political refugees.

Ariane Rummery, a spokeswoman UNHCR in Thailand, told Al Jazeera that at least some Hmong in the camp had expressed the need for protection in the past.

“According to the Thai government and according to their own screening process they have earlier determined that a number of them do have protection needs,” she said.

“Exactly what will happen we’re not in the position to say, but we do express our concern at the forced deportation and urge the government to hold this until a transparent process can assess what the needs are and explore either voluntary return or or resettlement for those people who do have valid needs.”

The deportations have been criticised by several human rights groups and the US, which has said it would be “deeply dismayed” by any move to force the refugees back to Laos.

“We have made it abundantly clear that we are prepared to roll up our sleeves and work with partners in Thailand for a solution that is humane and responsible,” Eric Schwartz, the US assistant secretary of state for population, refugees and migration told the AFP news agency on Sunday.

“Even at this late date we’re fully prepared to do that,” he said.

The Thai government has promised Laos, which insists the group will be safe after returning, that they would be sent back by the end of the year.

“These are our citizens and we have to take care of them,” Khenthong told The Associated Press news agency.

He said that the group would initially be placed in a temporary shelter and then housed in two “development villages” where each family will receive a house and a plot of land that international observers will be welcome to inspect.

In the past, Lao officials have been quoted as saying that the Hmong are not Lao citizens, comments that Khenthong dismissed as individual opinions that were not government policy. 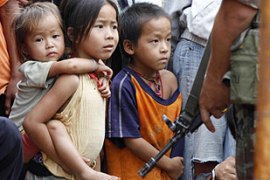 UN body calls on Bangkok to allow for the resettlement of refugees held in detention.