Argentina’s constitution does not specify that marriage must be exclusively between a man and a woman, but the country’s civil code does make the distinction.

The couple had previously tried to marry in Buenos Aires, the Argentine capital, but were prevented from doing so by city officials citing conflicting judicial rulings on the issue.

The couple then tried again in Tierra del Fuego where Fabiana Rios, the provincial governor, authorised the wedding after a local registry official refused to officiate.

Rios said in a statement that gay marriage “is an important advance in human rights and social inclusion and we are very happy that this has happened in our state”.

Di Bello, who is an executive at the Argentine Red Cross, met Freyre, the executive director of the Buenos Aires Aids Foundation, at an HIV awareness conference. Both are HIV-positive.

At Monday’s indoor ceremony, the grooms wore sport coats without ties, and had large red ribbons draped around their necks in solidarity with other people living with HIV.

Many in Argentina and throughout Latin America remain opposed to gay marriage, particularly the Roman Catholic Church.

He called the marriage “an attack against the survival of the human species”.

Same-sex civil unions have been legalised in Uruguay, Buenos Aires, Mexico City and some states in Mexico and Brazil.

Gay marriage remains even more controversial as it carries more exclusive rights such as adopting children, inheriting wealth and enabling a partner to gain citizenship. 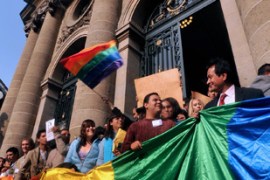