The prosecutor’s office said on Monday that a criminal case would be brought against Dymovsky for “fraud committed by a person using his official position”.

Dymovsky, who worked for the police force in the Black Sea port of Novorossiisk, said the charges against him were were fabricated.

“They want to silence me and gain revenge,” he told the Reuters news agency by telephone.

Dymovsky had appealed to Vladimir Putin, the Russian prime minister, to rein in senior officers whom he accused of pressuring subordinates to charge innocent people to meet statistical targets.

Regional police conducted their own investigation after the videos were released, which they said did not back up Dymovsky’s allegations.

“The main thing is that the people of Russia have seen the light. Others will follow me,” Dymovsky, who has founded a rights defence group, said.

Corruption is endemic in Russian society and global surveys have repeatedly ranked the former Soviet state as one of the most corrupt in the world.

Major Alexei Dymovsky sacked for posting video about corruption within the forces. 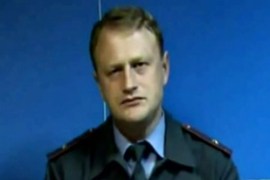 Officer says the police force is preordaining the results of investigations.