The official national news agency NNA said the blast was “the result of three bombs placed under a car whose owner is said to be a member of Hamas”.

Lebanon is home to 12 Palestinian refugee camps that house more than 200,000 registered refugees.

The blast came on the eve of the first anniversary of Israel’s 22-day offensive on the Hamas-controlled Gaza Strip, during which about 1,400 Palestinians and 13 Israelis were killed. 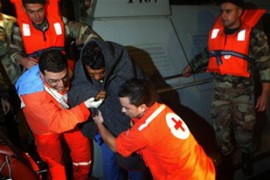 Fourteen people rescued a day after ship capsizes near port city of Tripoli.