Investigations have begun in Jamaica into why an American Airlines jet crashed and broke into pieces during a hard landing at the island’s main airport.

Officials said that 44 people were injured in the incident late on Tuesday night, although none of the injuries was considered to be life-threatening.

The flight was carrying 148 passengers plus six crew members.

The investigation is being led by the Jamaican Civil Aviation Authority, with officials from the US Federal Aviation Administration and National Transportation Safety Board joining the probe.

The aircraft, a Boeing 737, overshot the runway while landing in heavy rain at Kingston airport

It plowed through an airport fence, across a road and over an embankment, where it ended up lying on a grass-covered area a few metres from the Caribbean sea.

Mike Henry, the Jamaican transport minister, said the fact the no-one had died in the accident was a “Christmas miracle”.

“If the plane was going faster, it would have gone into the sea,” he said.

While the exact cause of the accident is under investigation, experts say weather could have been a factor, as heavy rain and flooding occurred in the country in the last few days.

Heavy rain can reduce visibility and make a jetliner harder to stop.

One passenger told a local radio station that the flight was “bumpy along the way and the landing was terrible”.

“The plane did not seem to be slowing down when it landed. There was a loud sound, then a huge thud and then we started to feel rain coming through the top,” he said.

“The plane crashed and broke almost in front of me.”

As day broke on Wednesday following the crash, the full extent of the damage became clear.

The aircraft’s fuselage was cracked open, its left main landing gear had collapsed, and its nose was crushed and pointing off toward the sea.

The incident in Jamaica is the second runway mishap for American Airlines this month.

On December 13, the wing of an aircraft struck a runway in the US state of North Carolina while landing, causing damage to the plane.

No one was hurt. 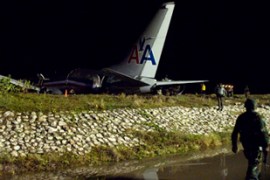 US plane crashes in Jamaica