The kidnappers raided Cuellar’s home on Monday, killed a police guard and dragged him into a vehicle.

His body was found less than 24 hours later near the abandoned and burned-out car.

The Colombian government has blamed the leftist rebel group, the Revolutionary Armed Forces of Colombia (Farc), for his murder.

The Farc has not claimed responsibility for the killing.

However, the group has taken more than 20 Colombian soldiers captive in the same operation in which Cuellar was killed.

“They murdered him, they cut his throat, they miserably murdered him,” Alvaro Uribe, the Colombian president, said in a televised address on Tuesday.

“The authorities explained that the terrorists didn’t shoot him in order to avoid the noise produced by shooting guns.”

Cuellar’s death is the first killing of a high ranking official since Uribe came to power in 2002 promising to build a “safe democracy” and crack down on armed groups.

The government had offered a $500,000 reward for information leading to Cuellar’s whereabouts, and Uribe said the offer would still stand for tracking down his murderers.

Farc has been weakened in the last few years by the government’s continued crackdown on its forces, and in the wake of the latest killing, another crackdown is likely to follow.

Last week, Farc announced it would unite with the National Liberation Army, known as the ELN, to confront what they called the “belligerent government”. 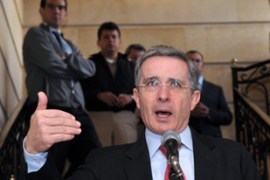 President says body of abducted official was found with his throat slit.