But Abdullah al-Faqih, a professor of political science at Sanaa University, told Al Jazeera on Thursday that he was sceptical of the claims being made about al-Awlaki.

“He is the son of a colleague of mine at Sanaa University. His father is an adviser to the president of Yemen. If they really wanted him, they could phone him and tell him to come back to the capital and arrest him.

“I have serious doubts about him being a target – simply because he is well connected to the government and there is no serious case against him,” al-Faqih said.

Thursday’s raid supposedly struck at a meeting of al-Qaeda operatives in Wadi Rafadh, a remote mountainous region lies about 650km east of the Yemeni capital Sanaa.

Alongside al-Awlaki, several senior members of al-Qaeda in the Arabian peninsula – a group formed of al-Qaeda fighters in Yemen and Saudi Arabia – were also thought to have been killed in the raid.

But there was confusion over the number of casualties.

“Local sources have said that the casualties from this strike was seven people only,” Mohammed al-Qadhi, a correspondent in Yemen for Abu Dhabi’s The National newspaper, told Al Jazeera.

“All of those are from al-Qaeda, according to local sources, but the government reports say there are more than 30 [dead].”

Nasser al-Whaychi, the head of al-Qaeda in the Arabic Peninsula, was thought to have been present at the meeting at the time of the attack but it is not known if he was killed in the raid.

Initial reports also said that two other al-Qaeda commanders, identified by security sources as Saad al-Fathani and Mohammad Ahmed Saleh al-Oumir, were among those killed.

But there was no official confirmation that any of the men had been killed.

Al-Oumir is thought to have been the man who spoke at a rally in Abyane, a rare public appearance by an al-Qaeda leader, footage of which was obtained by Al Jazeera.

Thursday’s attack comes a week after the raid on Abyane, which prompted the rally at which al-Oumir appeared and which allegedly killed dozens of civilians as well as al-Qaeda fighters.

Yemen’s government has been battling al-Qaeda in the country at the same time as dealing with a Shia uprising in the north and rising secessionist sentiment in the south. 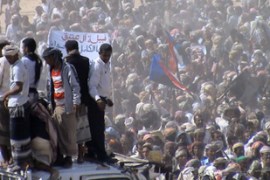 Suspected al-Qaeda commanders tell rally that their battle is with “God’s enemies”.