“Secondly, when they apply the law, they [the Chinese authorities] do not apply it consistently and they only selectively apply provisions, such as freedom of speech.”

Liu Xiaobo, who co-authored a petition appealing for reform and the protection of human rights in China, has been charged with “inciting subversion of state power”.

Bequelin said: “This is a politically driven trial where the decisions have been taken by the highest political authorities to arrest Liu and silence him, then they dress this trial with the trappings of a legal procedure.”

According to rights groups, the trial, held two days before Christmas, is an example of Beijing taking action against activists around major holidays, with the hope that it would go unnoticed.

Liu, a 53-year-old academic, co-wrote the Charter 08 petition, which was widely  circulated online.

It specifically called for the abolition of subversion in China’s criminal code – the very crime with which Liu has been charged.

According to China Human Rights Defenders, a network of activists, the petition was signed by more than 10,000 people, including other dissidents and intellectuals.

“Liu Xiaobo’s detention and trial show that the Chinese government will not tolerate Chinese citizens participating in discussions about their own form of government,” Sam Zarifi, the director of Amnesty International’s Asia-Pacific Programme, said in a statement.

“After Liu Xiaobo, more than 300 Chinese scholars, lawyers and officials who proposed a blueprint for improving their political system may be at risk, as well as nearly 10,000 signatories.”

The United States and the European Union have also appealed for Liu’s unconditional release and an end to the harassment and detention of political dissidents – calls which Beijing dismissed as “unacceptable”.

Authorities have barred diplomats from the US and other countries from attending Liu’s trial. 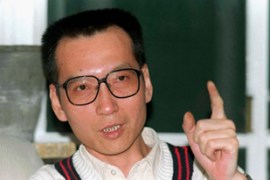 Verdict in trial of Liu Xiaobo due on Friday after trial lasting just two hours.