“These people have been living at the foot of the volcano for many, many years,” Jenny Reyes, a journalist with ABS-CBN in the Philippines, told Al Jazeera.

“They say they are used to it, they know how it goes, so they’re not really threatened by anything that might happen.”

Reyes said Joey Salceda, the governor of Albay province where the volcano is located, had been giving a stark warning to residents seeking to return to the danger zone.

“He has been telling them ‘if you’re there, you’re dead’, so he’s basically trying to scare them away from the volcano,” she said.

On Tuesday Salceda told Al Jazeera that patrols were searching the area for about 500 people still thought to be in the evacuation zone.

“We’re conducting house-to-house surveying to make sure people will go to the evacuation centres. There is some resistance due to the Christmas season,” he said.

“To keep people in the evacuation centres we’re holding concerts and other activities in order to keep people from going home.”

A major hazardous eruption of the volcano could occur before the end of the week, scientists have said.

Mayon, the most active of 22 volcanoes dotted across the Philippines, has been rocked by hundreds of increasingly powerful earthquakes in recent hours, suggesting a major explosion could be imminent.

However, volcanologists studying the rumbling mountain say that at the same time the volcano may yet calm down or settle into a more moderate eruption phase.

As of early Wednesday, scientists said they had detected a slight decrease in the number of volcanic earthquakes shaking the cone-shaped mountain.

He said observers had also tallied 280 “audible booming and rumbling sounds” from Mayon, which were heard up to 15km away from the volcano’s crater.

Meanwhile residents living outside the evacuation area are reporting health problems from the clouds of volcanic ash ejected from the volcano.

Villagers have said the ash is stinging their eyes and irritating their skin. 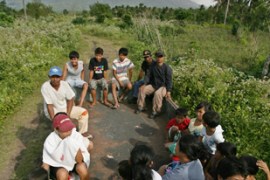