“Military high command told me that as law enforcement was in hot pursuit, the terrorists, most likely to avoid firing shots, went ahead and slit the governor’s throat.”

Cuellar’s body was discovered by farmers near the charred remains of a car.

The governor is the first to be kidnapped and murdered since Uribe took office in August 2002 promising a “safe democracy” and cracking down on armed groups.

Cuellar was abducted from his home in Florence, the capital of Caqueta state, on Monday by armed men dressed in military uniforms.

General Orlando Paez, the national police operations chief, said Cuellar was abducted by up to 10 men who killed a police guard and blasted their way into his home with explosives.

Olga Patricia Vega, the interim governor of Caqueta, said that after his abduction, Cuellar apparently had trouble walking which led to his execution by his captors.

Vega said Cuellar, who turned 69 on Tuesday, had already been kidnapped four times before he became governor.

The government had offered a half-a-million dollar reward for information leading to Cuellar’s whereabouts, and Uribe said the offer would still stand for tracking down his murderers.

Authorities said they suspected the Teofilo Forero unit of the anti-government Revolutionary Armed Forces of Colombia (Farc) had carried out the attack.

Farc has fought a 40-year-long war against the government, that reached a peak in the 1990s when kidnapping was widespread and the group had autonomy over a large regions of the nation’s jungle.

But since Uribe became president a significant increase in military power has weakened the group.

The area of land under the Farc’s control has reduced significantly, while senior leaders have been killed.

Some of the Farc’s prominent hostages have also been rescued from jungle captivity, including Ingrid Betancourt, the French-Colombian politician in 2008.

But the group is said to still have about 7,000 fighters and is thought to be holding captive at least 22 police officers and soldiers. 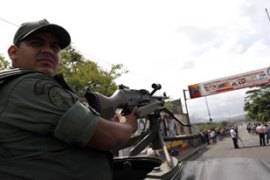 Minister says Bogota is preparing for ‘foreign aggression’ as ties with Caracas worsen. 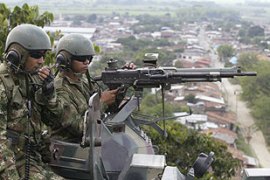 Main rebels groups to unite with “force and belligerence” against government. 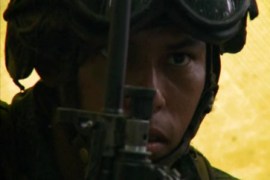 Sold as US support for the “war on drugs”, why has the accord caused outrage in South America? 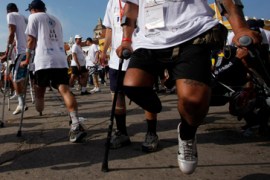