Winter storms across the continent have led to at least 90 deaths in recent days, including 42 mostly homeless people in Poland, where temperatures have plunged to minus 20 degrees Celsius.

The travel chaos began on Friday and Saturday when five Eurostar trains broke down, trapping more than 2,000 passengers inside.

Rory Challands, Al Jazeera’s correspondent at the Eurostar terminal in London’s Kings Cross station, said queues for the resumed service on Tuesday were “stretching around the lounges” and appeared to be growing longer.

“Those travelling on Eurostar today are not people with tickets to travel today but those who were supposed to be travelling on Saturday and Sunday.”

Ian Nunn, a senior Eurostar executive, told Al Jazeera: “People are bearing with us. We are doing our level best to deal with the backlog.

“We are asking people to only turn up if they have tickets for Saturday or Sunday. The priority is to deal with passengers who are stranded and have been so for two or three days.

“[To our passengers] we say sorry. We are refunding tickets and trying to be practical.”

Warsaw, Poland’s capital, has suffered temperatures of -15C below average, while Russia has also been feeling its heaviest snow of the season.

Temperatures are expected to rise on Thursday, with westerly wind chills dropping and central European temperatures increasing by 5 or 6C.

Some airports, including Frankfurt, are beginning to allow aircraft to take off, but flight disruptions are expected to continue.

Flights have been cancelled in France, Germany, the Netherlands, Portugal  and Spain and main highways were blocked across Europe where some regions had more than 50cm of snow.

Al Jazeera’s Challands said the weather “is not looking to get any better any time soon”.

“Mostly people are trying to get back for Christmas to see their families, so it is a big inconveniece for them.”

The French government has said that it will investigate the breakdown of Eurostar trains, which they believe may be due to more than the unusually dry snow sucked into train engines the firm has blamed. 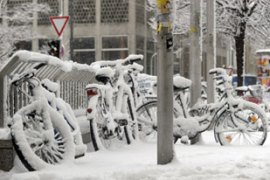 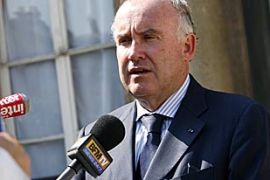 Transport minister says he doubts bad weather could be sole cause of service disruption.