The wing now dominating the movement is more focused on religious aspects and is not in touch with the political reality on the ground, Amr Shoubaky, an analyst with the Al-Ahram Centre for Political and Strategic Studies, told the AFP news agency.

He said divisions within the party are likely to “lessen the brotherhood’s political weight and weaken its participation in the 2010 parliamentary elections”.

Mohamedd Mahdi Akef, the group’s chairman whose term ends on January 13, said: “The Muslim Brotherhood group members have suffered during the past few weeks from several incidents, contradictory statements and the general atmosphere that had prevailed.”

Mohammed Habib, the group’s deputy leader, and Abdel Moneim Abul Futuh, a reformist, were not elected.

Habib told the Al-Shorouk newspaper on Sunday that the group was split between those who wanted the Brotherhood to become more active in the country’s political life, and those who wanted to maintain the status quo.

Diaa Rashwan, a political analyst, said sidelining Habib and Abul Futuh “is a serious coup for the reformist group within the movement which seeks more openness and participation with other opposition groups.”

“The results of these elections signal the immediate regression of political activity of the group in the coming period.”

The new governing body is likely to focus on social and religious grassroots work and avoid open confrontation with the state, Rashwan said.

The Muslim Brotherhood is officially banned by the Egyptian government.

Last week’s internal election was the first for 14 years.

That the poll was held openly without a state crackdown indicates the government’s tacit approval of the new governing body, Khalil El Anani, a political analyst, said.

“It is a game … The regime knows the elections will lead to division and conflict inside the movement and the conservative wing taking over.”

“Most of the new members are over 50 years old and there is no representation of Brotherhood’s youth.”

In 2005, the group gained 20 per cent of the seats in parliament with members standing as independents.

Since then, a fierce government crackdown has left many prominent members behind bars.

Authorities and state media say the Brotherhood is aiming to establish a religious theology through extremism. 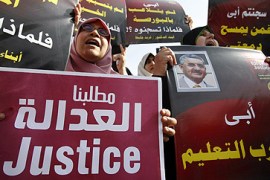