Talks between the Chinese envoy and Chiang Pin-kung, his Taiwanese counterpart, will be the fourth meeting since Ma Ying-jeou of the pro-China Kuomintang (KMT) party became president of the island in May last year.

Chen and Chiang will be discussing the proposed Economic Co-operation Framework Agreement (ECFA), a pact aimed at cutting import tariffs and opening the banking sector that should be signed next year.

On Sunday, tens of thousands of banner-waving demonstrators had marched through Taichung to protest against Chen’s visit and Taiwan’s growing ties with its neighbour.

The opposition Democratic Progressive Party organised the weekend march which saw protesters, many of them wearing orange headbands, chanting “Go! Go! Taiwan!” and “Taiwan, China – one country on each side!”

Al Jazeera’s Steve Chao, reporting from Taichung, said many in the crowd were business people concerned that their businesses will be affected by the free trade talks.

“A lot of criticism here has been directed at Taiwan’s president, Ma Ying-jeou. They feel he is moving too far, too fast with China and they are calling on him to rein back the momentum on warmer relations with China,” he said.

Hsu Wen, a 55-year-old businessman from the southern city of Kaohsiung, told The Associated Press news agency: “It’s all very clear [China] wants to use the economy as a means to force us to unification.”

Some protesters feared the ECFA would lead to a flood of competing goods from China, while other called for the talks to be more transparent.

“Ma Ying-jeou, our president, wants to sign ECFA but hasn’t received public approval for it,” Charles Lee, president of an environmental group in southern Taiwan, said.

“We’re worried he will sell us out.”

The Ma administration has promised the pact will lift growth and create employment.

Also among the thousands of people on the streets of Taichung on Sunday were supporters of a formal declaration of independence from China.

China has claimed sovereignty over Taiwan since 1949, when the communist forces of Mao Zedong won the Chinese civil war and Chiang Kai-shek’s Nationalists fled to the island.

Beijing has previously vowed to bring Taiwan under its rule, by force if necessary.

Since assuming office, Ma has eased tensions to their lowest level in 60 years, turning his back on his predecessor Chen Shui-bian’s pro-independence policies while pushing business and trade links.

Regular air and sea links have been established across the strait separating Taiwan from China and restrictions on Chinese investment in Taiwan have been ended. 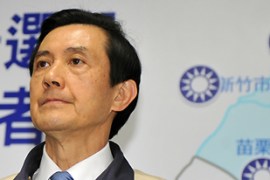 Local elections seen as test of president’s policy of engagement with China. 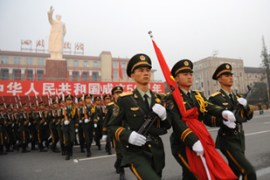 Taiwan and China military ‘to meet’

Military from China and Taiwan to meet for first time in 60 years, Chinese media says. 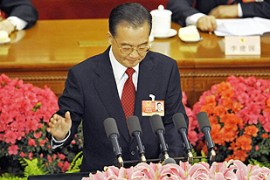