Officials had also appealed to international police organisations Interpol and Europol for help.

More than one million people, mostly Jews, but also Roma, Poles and others, died at Auschwitz – most of them executed in gas chambers or worked to death in the camp’s factories.

The five metre sign was reportedly recovered following a raid in northern Poland late on Sunday.

The sign had been cut into three pieces, one for each word.

Speaking to Al Jazeera, Lukasz Lipinski, editor of Gazeta Wyborcza, a Polish newspaper, said: “We know that these five people are being held by the police.

“We know that the motive is that they wanted to sell that object, that top of the gate, that symbol.

“And we know that there is some unofficial information that someone actually ordered them to steal it through the interent.

“As far as we know there is no connection between them and any fascist, or Nazi or far-right groups.”

The director of the Auschwitz museum said at the weekend that urgent renovation work on the camp’s crumbling buildings meant the museum had to make do with a rudimentary security system.

“The surveillance was concentrated on the archives and exhibited objects, because no sane person could have imagined such an act,” Piotr Cywinski told the AFP news agency.

“The camp entrance, from where the sign was stolen, was being monitored by just one camera, an old model. Moreover the snow meant the image was blurred.” 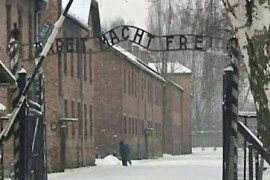 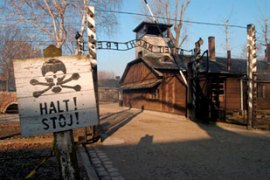 Decision taken as Polish and German politicians argue over the Nazi occupation.