The protesters blocked main streets in the city and threw stones at officers, who retaliated by firing tear gas and beating them with bamboo batons.

“We used water cannon and baton-charged the protesters after they threw stones and injured 17 officers,” he said.

“Twenty-seven vehicles were torched by protesters.”

At least one officer was in critical condition with head injuries, Sharma said. About two dozen protesters were also injured.

Those arrested were accused of vandalising vehicles that had ventured out on the street and defied the general strike, Sharma said.

The regional Office of the High Commissioner for Human Rights (OHCHR) said Nepalese police had used “excessive force” against the protesters and urged both sides to show restraint.

“Today’s display of violence was some of the worst on the streets of Kathmandu for several years,” Richard Bennett, the chief of the United Nations human rights office in Nepal, said in a statement.

“Police were observed to use excessive force on the crowd, including inappropriate use of lathis [canes] and tear gas, and even stone-throwing.”

Political tensions have been high in Nepal since a Maoist-led government resigned in May amid the dispute with Yadav over the army chief’s failure to incorporate former Maoist rebels fighters into the military.

Led by Prachanda, the former prime minister, the Maoists have said that the president’s decision to reinstate the military chief undermined the civilian government and have since staged regular protests.

“Our efforts to break the deadlock with political parties in the government have failed,” Prachanda said after a party meeting late on Saturday.

The Maoists gave up armed revolt in 2006 and emerged as the largest political party in elections last year, managing to get the 239-year-old monarchy abolished through a special assembly which turned Nepal into a republic.. 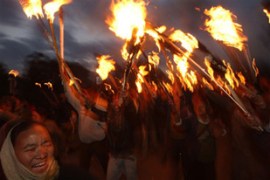 Activists close roads and attack shops in protest over deaths of forest settlers. 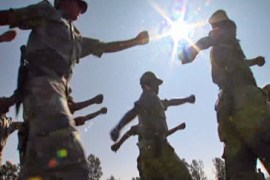 About 20,000 rebels remain in containment camps, awaiting integration into army. 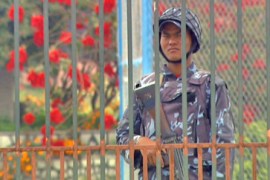 Unresolved dispute over president’s powers bring thousands of Maoists onto the streets. 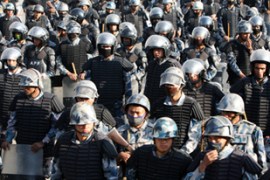