“We should prove if allegations are true and if they are false, then it is my duty to defend the dignity of the accused.”

Karzai’s list of 23 ministers was read to parliament by Anwar Khan Jigdalik, the minister for parliamentary affairs, on Saturday after a session during which politicians questioned the legality of the process.

Masoda Jalal, a former minister of women’s affairs and a former presidential candidate, told Al Jazeera the nomination of just one woman shows that “the worst enemy of president Karzai is Afghan women political leaders” and puts the legitimacy of the government in serious question.

“President Karzai can sit and share the political power with human rights violators, with war criminals, war lords, extremists, with drug dealers and with all these negative elements of Afghanistan society as national local sources of power but cannot sit with women.”

Karzai, who in November was declared the winner of the country’s disputed presidential election, has faced pressure from the international community to crack down on corruption in his government.

The US and Nato member countires, who each have troops in Afghanistan, say that anger over corruption in the government has helped fuelled an insurgency by the Taliban.

Hashem Ahelbarra, Al Jazeera’s correspondent in Kabul, said Karzai is also under pressure from the Afghan people and his domestic political rivals.

“You have the Afghan people and some members of the Afghan parliament saying that, by his choices, Karzai is betraying his commitments … on ending the culture of corruption, which has been so pervasive in Afghanistan,” he said.

“It seems that this is going to be a government of appeasement because he is beholden to the warlords who endorsed him in the election.

“At the same time, he has to answer some of the demands of the international community. Karzai knows that people want him to take action, and this is why he is now talking about the fight against corruption.”

Karzai’s proposed government line-up does not include any figures from the opposition.

The leaders of the three main security offices, including the head of the National Directorate of Security, which handles intelligence, will remain in the same position at a crucial time when thousands of new police and army recruits are being trained and deployed.

Abdul Rahim Wardak, the national defence minister, who has been praised by Robert Gates, the US defence secretary, will remain in his position.

The interior and finance ministers will also stay, as had been expected. 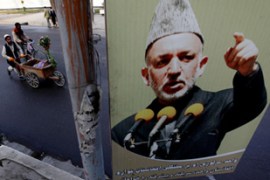