While most of the US sat transfixed by the ever-widening saga of Tiger Woods’ infidelities, Barack Obama, the US president, gave what might well be remembered as one of the most significant speeches by a US leader in the post-World War Two era.

It is no coincidence that the one should happen in the midst of the other. They may seem utterly disconnected, but both reflect the end of an idea of American exceptionalism that for too long has excused and even enabled the violation of the very ideals it was meant to reflect.

Woods became the richest athlete in history by creating a persona defined by unprecedented talent coupled with steely invincibility and a sense of “fair play” supposedly peculiar to golf – and to the US as well.

Sponsors paid him hundreds of millions of dollars and Americans of all classes and colours flocked to his “brand” in order to identify with such a consummate winner, the epitome of the American dream and its sense of uniqueness and historic mission.

No one cared to explore the realities beneath the dream until it could be spoon fed to them in depoliticised, sensationalised tabloid format.

Few fans, never mind the mainstream media, will look beyond the sex to scrutinise the engine that has powered brand Tiger. Serial infidelity can be safely condemned and ultimately forgiven.

It would be a lot harder to ignore the implications of the relationships with unsavoury corporations that have made Tiger fabulously wealthy when he inevitably returns to professional golf.

But who wants to be reminded of exploited third world labour or toxic oil spills while watching Tiger sink another miracle put?

Like the trans-fats or preservatives in fast foods, thinking about them will only detract from the consumer experience.

And so while Woods has admitted personal mistakes in order to preserve his brand, the underlying rationale and costs of the system that sustains it (and all those who feed off it, from television networks to tabloids) will not be challenged, or even mentioned.

And this is where the Tiger Woods saga intersects with the situation Obama now faces.

Like Woods, America’s brand is under threat. Unlike Woods, however, Obama cannot be blamed for the problems that so tarnished the country’s image in the last decade.

Indeed, as Thorbjorn Jagland, the chairman of the Nobel committee, all but admitted, he was awarded the Peace Prize in good measure because of his attempts to re-brand the US as a less bellicose, more cooperative global leader.

Read through the “Obama Doctrine” outlined in his Nobel speech, however, and the similarities to the strategy behind the rehabilitation of ‘Brand Tiger’ are clear.

“We lose ourselves when we compromise the very ideals that we fight to defend,” the president eloquently intoned.

The reality is that Obama is willing to admit to “mistakes” made by predecessors, but he will not question, or even mention, the larger system that has produced them.

He cannot do so because that would call into question the myth of American exceptionalism that for so long has been used to justify them.

As long as the US is a unique, divinely appointed and essentially just power, its mistakes, however costly, do not threaten the core values that have made it exceptional.

Obama cannot acknowledge what the rest of the world well understands: that the wars he has inherited, and have now made his own, are the direct result of decades of policies aimed at supporting a system that enabled the global dominance of the US, but at the cost of large-scale violence, oppression and exploitation across the developing world.

Rather than challenge or even scrap the system that produced this violence and the periodic blowback it generates, the Obama doctrine will reinforce it.

Thus the bewildering continuities between Obama’s policies and those of George Bush, his predecessor, emerge: the continued presence in Iraq – which is not close to “winding down” as the president described it, the deepening footprint in Afghanistan, the refusal to support treaties banning land mines and biological weapons, the continued use of private mercenaries, the ongoing detainee abuse at Guantanamo and Bagram prisons, and defence spending higher even than his Republican predecessor’s.

These are not mistakes; they are inevitable policy choices in a system built on imperial dominance. And like empires past, they are justified by the use of rhetoric and arguments that exalt one’s own ideals while misrepresenting and denigrating those against whom the mistakes are committed.

But where Bush administration officials readily admitted America’s imperial status, Obama has banished the idea from polite conversation even as he shores up the system.

And so Obama declared in Oslo that when the US fights it does so as the “standard bearer” of morally justifiable violence, engaging only in “just wars” to pacify otherwise unresolvable conflicts.

To be just, war must be against implacably evil opponents. And so, the president declared sternly in Oslo, “Make no mistake: evil does exist in the world.”

There are, he continued, “limits [to] reason,” particularly when one is fighting an enemy that can only be associated, as Obama – like Bush before him – did, to Hitler.

Because America’s intentions and values are uniquely pure, its sacrifices alone are worthy of mention.

Obama declared, “The plain fact is this: the United States of America has helped underwrite global security for more than six decades with the blood of our citizens and the strength of our arms.”

The fact that the global security so underwritten was, like that ensured by other empires past and present, derived from the subjugation, exploitation and death of countless people – described by Obama in strikingly imperial tones, as “tribal” and unable to “reason” – cannot be mentioned.

Their deaths, in the millions in Vietnam, in the hundreds and tens of thousands in Iraq and Afghanistan (not to mention in Latin America and Africa during the Cold War) are left unremarked.

When they must be mentioned, conflicts underwritten by the US, such as that between Israel and Palestine, are historically and morally whitewashed.

Instead of condemning a client state continuing to occupy a besieged nation, Obama laments the “hardening” of “tribal lines” between “Arabs and Jews” – a description so devoid of factual relevance that Obama the law professor would have surely scolded any student who uttered them.

At its heart, Obama’s Nobel acceptance speech reveals that even this most eloquent and reflective of presidents cannot find a new vocabulary to describe America’s relationship with, and role in, the world.

The reason is clear: such a vocabulary cannot exist in the geopolitical framework in which Obama, whatever his intentions, feels constrained to operate.

Instead, the myth of American exceptionalism must be reasserted; it is the only way the president, and the American people with him, can imagine that the US will not ultimately suffer the same fate as the empires before it; that the iron laws of imperial rise and decay, and the violence attending both, simply will not apply to it.

Only then can it be imagined that the “evil in the world” has not touched us; that the “imperfections of man and the limits of reason,” as the president described them, apply to other men and ideas, and not to ours.

Only then can Obama mention human rights seven times in his speech while leaving unsaid what everyone sitting before him well knew: that US aid and support for regimes that systematically violate these rights would continue the next morning uninterrupted.

The awarding of the Peace Prize to Obama reads like a desperate attempt to resuscitate the discredited idea of a “Great Man” of history ushering in a new era. It is an understandable fantasy, given the magnitude of the problems the world confronts.

But it distracts from the reality that it will be movements from below, however imperfect and irrational they can be, that will create, in Obama’s words, “the world that ought to be,” not leaders from above, however audacious their rhetoric.

In that regard, perhaps the most historically significant aspect of Obama’s speech is its irrelevance on the ground.

Around the world people who once looked to the US for inspiration or support are taking matters into their own hands. No one is waiting for the US to save or even support them anymore. The signs are everywhere, particularly in nearby Copenhagen, where smaller nations and a global NGO community is standing up to the US and other powers with unprecedented force.

But perhaps the most interesting signs surround the conflict Obama would not name, in the Holy Land.

No doubt in part to assuage its members’ growing “Muslim problem” as well as to fill the void left by the absences of even a semblance of impartial American mediation, the European Union is suddenly asserting its diplomatic weight by demanding Israeli recognition of East Jerusalem as Palestinian and refusing to support unilateral Israeli border drawing in the West Bank.

On the ground, Palestinians are slowly taking responsibility for resistance back into their own hands, literally taking apart sections of the Separation Wall piece by piece rather than wait for Hamas or the Palestinian Authority to make another ineffectual move.

At a closed door meeting I just returned from in Istanbul, Palestinian and Israeli scholars and activists, including those deeply involved in the settlement movement, are beginning the hard but necessary work of envisioning a new architecture of identity that would allow Israeli Jews and Palestinian Arabs to share sovereignty and territory throughout the whole of Israel/Palestine.

These and other uncoordinated attempts to change the basic structure of the system Obama is trying to reinforce represent the first stirrings of a new vocabulary, even language of change.

When coupled with the burgeoning struggles for democracy and human rights in the Muslim world, and even broader struggles across the global south, they constitute a direct challenge to the system President Obama, like his counterparts in Moscow, Beijing, and other global power centres, prefers to leave unnamed.

Such a multi-layered, often disorganised movement will likely remain too amorphous and hard to define ever to award a Nobel Peace Prize. But if history is kind, it just might help usher in the global transformation that Obama and the Nobel committee can only dream of.

Mark LeVine is currently visiting professor at the Center for Middle Eastern Studies at Lund University, Sweden. His books include Heavy Metal Islam: Rock, Resistance, and the Struggle for the Soul of Islam and Impossible Peace: Israel/Palestine Since 1989. 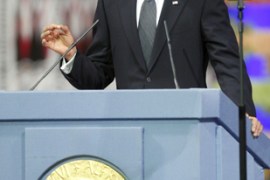 US president acknowledges the cost of war while accepting Nobel Peace Prize. 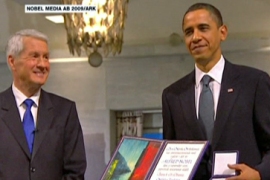 US president acknowledges controversy over prize amid wars in Iraq and Afghanistan. 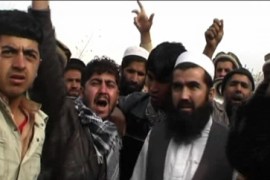 People of war-torn country criticise decision to award peace prize to US president. 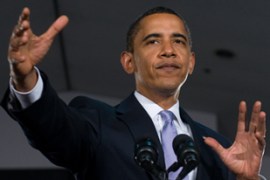 US president hopes successful foreign policy will silence critics of his peace prize.