But that deal and a succession of others have fallen through as Rajoelina and three former presidents squabble over the division of key jobs in a consensus government.

Cecile Manorohanta, Madagascar’s vice prime minister and a close ally of Rajoelina, will take over the premiership indefinitely.

Analysts said Rajoelina’s move would dent hopes for the unblocking of aid worth hundreds of millions of dollars.

Hours earlier, members of Madagascar’s opposition said they would form a unity government within days and called on the military to stay in their barracks.

Albert Zafy, the country’s former vice-president, said: “We are going to put in place our ministers and we ask the armed forces to remain neutral and stay in their barracks.”

Zafy was among opposition leaders who returned to the island after Rajoelina’s administration lifted a ban on their re-entry following talks in Mozambique.

“Rajoelina has reneged on his signature. We can no longer trust him to run the country,” Zafy said.

Rajoelina, who toppled former leader Marc Ravalomanana with military support in March, said on Thursday it would be impossible to share power with political enemies.

He said the international community no longer needed to involve itself in Madagascar’s affairs.

In a statement seen by Reuters on Friday, France has called for speedy, transparent elections that are monitored by an independent electoral commission and foreign observers.

While France, Madagascar’s former colonial power, did not condemn Rajoelina outright, it urged all parties to resume dialogue in search of a consensus solution.

Foreign countries have said they will re-engage with Madagascar only after a consensus government is established and a road map to free and credible elections is in place.

Rajoelina has not set a timetable for a presidential election which, under the terms of the original power-sharing deal, must be held by late 2010. 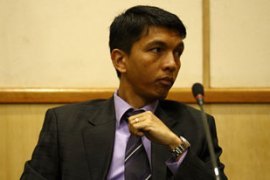 Ousted president granted amnesty but will not serve in transitional government. 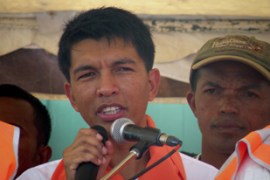 Marc Ravalomanana jailed for four years and fined $70m for “abuse of power”. 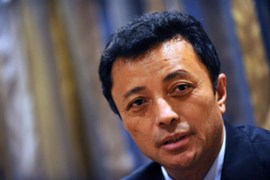 Agreement to allow ousted president to run against incumbent leader in new polls.