“They will seek to return to their former strongholds and punish the population for collaboration with government forces, if they are allowed to do so,” he said.

Many FDLR rebels fled to eastern Congo after participating in the 1994 genocide in neighbouring Rwanda that killed more than 500,000 people.

Subsequent fighting ballooned into back-to-back civil wars from 1996 to 2002 that drew in other neighbouring countries in a rush to plunder the DR Congo’s massive mineral wealth.

The UN maintains the world’s largest peacekeeping force in the DR Congo with some 19,000 so-called blue helmets deployed in the country.

But amid mounting allegations of war crimes by the Congoloese army in the country’s east, the Security Council is reconsidering its mandate in the country.

On Monday a report by New York-based Human Rights Watch (HRW) said the offensive had led to more than 1,400 civilians murdered this year by both Congolese troops and rebels.

According to the report Congolese soldiers, supported and fed by the UN, gang-raped girls and cut the heads off some young men accused of being rebels or supporting the enemy.

“As long as the Congolese Army is continuing to commit war crimes then UN peacekeepers, through their support of these soldiers – are themselves violating the laws of war,” she said. 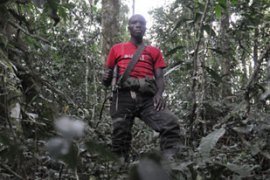 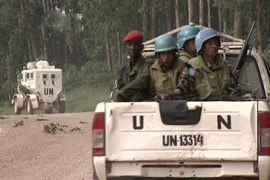 Two men accused of murder, rape and using child soldiers go on trial in The Hague. 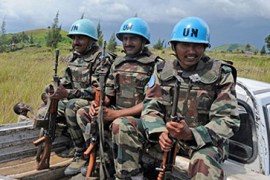