The career of Asif Ali Zardari, the Pakistani president and co-chairman of the Pakistan People’s Party (PPP), has been tainted by political scandals and fraud allegations.

He won the country’s presidential election in September 2008, but if the supreme court rules that an amnesty deal giving Zardari immunity from corruption charges is illegal, he could be stripped of his presidency.

Zardari’s opponents have given him the nickname “Mr 10 per cent” in reference to repeated corruption allegations.

Zardari is the widower of the late former Pakistani prime minister, Benazir Bhutto, and served as a minister during his wife’s second term of premiership.

Controversies around Zardari started shortly after he married Bhutto in 1987. He has since spent 11 years in prison on murder and corruption charges.

Money-laundering charges were made against both him and his wife. The couple said the allegations were politically motivated.

After the assassination of Bhutto on December 27, 2007, Zardari was selected to co-chair the Pakistan People’s Party (PPP) with his son, Bilawal Bhutto Zardari.

Zardari led the party through successful elections and worked with former political enemies to force Pervez Musharraf, then president, to resign.

In 1990, he was accused of attaching a bomb on Murtaza Bukhari, a Pakistani business man, and forcing him to withdraw money from his bank account.

After spending three years in prison, Zardari was released in 1993 after charges of blackmail were dropped.

He was then installed as minister in the PPP government, but was arrested again when the cabinet lost power.

He faced murder charges after his late wife’s brother-in-law, Murtaza Bhutto, was assassinated in 1996, and spent another eight years in custody.

A judge granted Zardari bail and released him in November 2004, saying the cases against him were false.

Zardari and Bhutto both spent several years in self-imposed exile. Zardari lived in New York, Dubai and London before returning to Pakistan with Bhutto in October 2007 for her campaign for a third term as prime minister.

He underwent medical treatment in 2004 in the US. He suffers from diabetes, a spinal ailment and heart trouble. 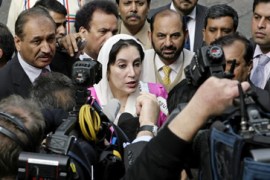