Church sources have said a number of bishops mentioned by the report are likely to offer to resign, in what they said would lead to a shake-up of the Irish Roman Catholic church.

Diarmuid Martin, the Roman Catholic Archbishop of Dublin and Primate of Ireland, said on Thursday that he would continue to meet the priests named in the report to prepare a “radical reform” in the Archdiocese of Dublin to be completed early next year.

Murray served for 14 years, until 1996, as auxiliary bishop in the Archdiocese of Dublin before being appointed to the diocese of Limerick.

He said: “I asked the Holy Father to allow me to resign and to appoint a new bishop to the diocese because I believe that my presence will create difficulties for some of the survivors who must have first place in our thoughts and prayers.”

The Vatican statement did not mention the scandal but said the pope had accepted Murray’s resignation according to a clause of canon [church] law that calls on bishops to quit if they cannot fulfil their duties for a “serious reason”.

The Murphy Commission report came six months after the release of an even more graphic report about floggings, slave labour and gang rape in Ireland’s now defunct church-run industrial and reform schools in the 20th century.

Issued on November 26, the report found the church had “obsessively” hidden child abuse from 1975 to 2004.

It said that of the 13 auxiliary [assistant] bishops in the archdiocese who knew about complaints of child sexual abuse over that period, four, including Murray, “dealt particularly badly with complaints”.

The archdiocese had been more preoccupied with protecting the church’s reputation than safeguarding children, it said.

Murray “did not deal properly” with the suspicions and concerns expressed to him in relation to one priest, Father Tom Naughton, in 1983, the report said.

A short time later, evidence of Naughton’s abusing emerged in another parish.

“Bishop Murray’s failure to reinvestigate the earlier suspicions was inexcusable,” the report said.

Last week, Irish church leaders met the pope in Rome, who expressed “outrage, betrayal and shame” over the affair.

The church’s moral authority in Ireland has been eroded in recent years following a string of clerical sex abuse scandals, many of them involving priests molesting young boys.

Similar abuse cover-up charges have dogged the Catholic church in other countries, especially the United States.

Seven dioceses there have filed for bankruptcy protection to shield themselves from law suits by abuse victims. 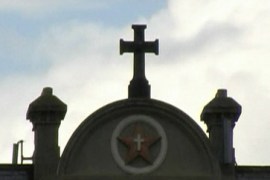