“Mr Rajaratnam is innocent and looks forward to his day in court when a jury of his fellow citizens will examine and evaluate all of the evidence,” John Dowd said in a statement after the indictment was returned.

Rajaratnam, a US citizen, was freed on $100m bail, an amount he hopes to have reduced.

Rajaratnam and Chiesi are the only indictments returned so far in the case, in which 20 people are facing criminal and civil charges.

Most of the accused have expertise in tech stocks.

The allegations included passing inside information on earnings announcements, takeovers and contracts on 10 companies, generating more than $30m in illegal profits, according to prosecutors.

Six traders or lawyers have pleaded guilty to charges in the investigation, which ensnared employees of IBM Corp, McKinsey & Co management and former lawyers of the Ropes & Gray law firm.

Prosecutors say their investigation has identified about $40m in alleged illicit gains.

According to Forbes magazine, Rajaratnam is the world’s 559th richest person with a net worth of $1.3bn.

His case has been followed closely in Sri Lanka, Rajaratnam’s home country. 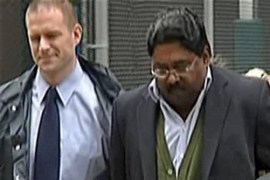 US banker under Sri Lanka scrutiny