The motion required at least 25 votes of the 49 elected members of parliament to pass, with cabinet ministers banned from such votes.

Had it been passed, the motion would have been sent to the Emir, Sheikh Nasser’s uncle.

He who would have either dismissed the prime minister or dissolved parliament and called for fresh elections.

It was the first time a Kuwaiti head of government has been questioned in parliament since democracy was introduced to the oil rich state in 1962.

Following his victory, the prime minister reiterated his strong commitment to the country’s constitution and democracy.

He also urged MPs to turn a new page and to improve cooperation between the government and parliament.

Al-Khorafi asked the premier to work for the stability of oil rich Kuwait and to rectify mistakes that he was accused of committing.

Since Sheikh Nasser was appointed in February 2006, Kuwait has been rocked with political instability.

He has resigned five times and formed six different cabinets. 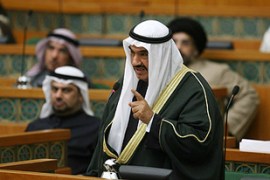 In a first for the Gulf emirate, legislators quiz PM over alleged corruption. 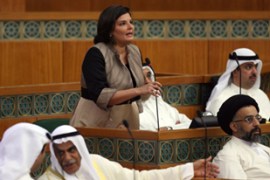 Kuwait MPs in walkout over cabinet

Protests mark parliament’s first session amid appeals by emir for co-operation with cabinet.